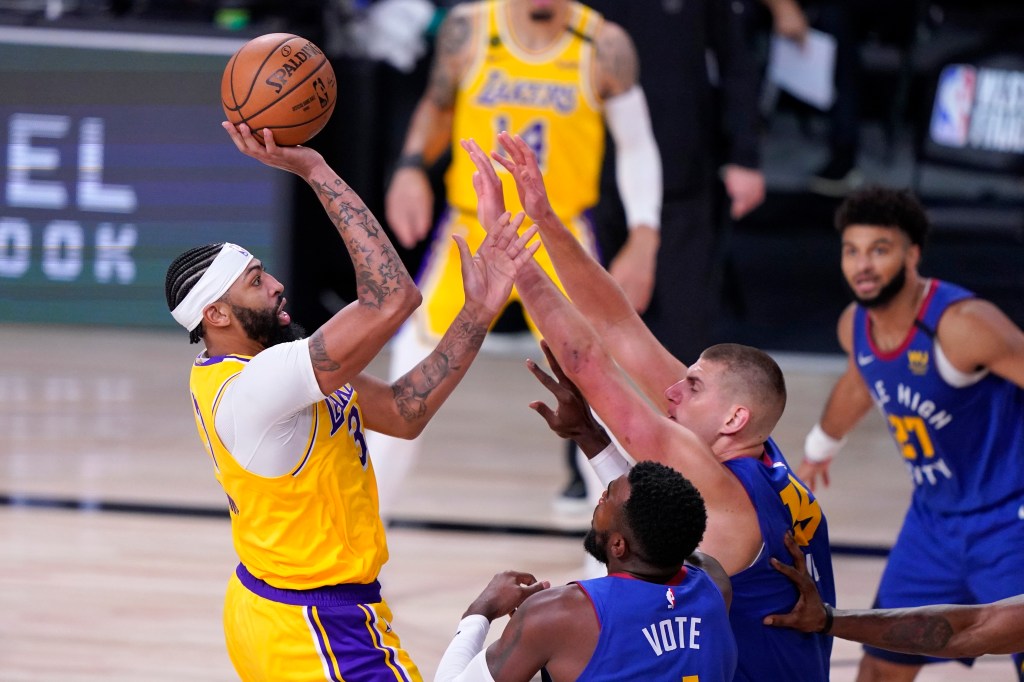 Let’s be clear. No team in the NBA is immune from the aftereffects of Anthony Davis.

It’s just that the Denver Nuggets are in the high-risk pool.

The Lakers rolled to a 126-114 Game 1 victory in the Western Conference Finals on Friday. This prompted TNT’s Charles Barkley to get out the kitchen broom and start sweeping the studio floor.

Sir Charles has been a little off on his assessments — i.e., he’s only even-money to tell you this is September — and you would expect the vibe of this series to change. But some tangibles will not. Davis will get no shorter or more ponderous, and presumably his hunger for a first NBA championship will not wane. He is the most puzzling problem for the Nuggets on this advanced-placement test.

Nikola Jokic and his bottomless trick bag was a major reason the Nuggets got this far. Once he could dispose of Ivica Zubac in the second-round series against the Clippers, there was nobody to bother Jokic’s air space. Against the Lakers, Jokic was immediately confronted by JaVale McGee, and later he was thoroughly rattled by Dwight Howard. If the Lakers ever get to an urgent fourth quarter situation, Davis will roll out his first-team All-Defense credentials on Jokic.

Instead, Denver was beleaguered by Davis’ virtuosity on the other end. The Nuggets don’t have a big stopper on defense, and when Jokic was harried into foul trouble by Howard & Co, they weren’t very big at all. Davis was able to shoot without obstruction, and he went 12-for-21 and scored 37.

“The guys tell me to be aggressive because that’s how we’re going to get where we want to go,” Davis said.

Davis continued to show his connection with Rondo, his former New Orleans teammate, who is feeling good to drive the baseline and flip the ball over the top of the backboard and into the hoop.

“I’m always checking the weak side help,” Rondo said. “There’s only one person who’s going to get those lobs I throw up in the air, especially if there’s smaller guards on the other side.”

But Rondo was only the first bench soldier. When Markieff Morris wasn’t drilling 3-pointers, Howard was commanding the boards well enough to earn a start in the second half. Kyle Kuzma and Alex Caruso just added to the wave. Remember when bench play was considered a Lakers blemish, one that would clearly spread in Orlando without Avery Bradley?

And even though the Lakers double-teamed Jokic from time to time, they never lost sight of the many cutters and shooters that grow fat and happy thanks to Jokic’s largesse. The big man only had two assists, which meant Denver’s offense basically came down to whatever Jamal Murray could forage for himself. Since Murray also had three fouls in the first half, Denver’s Game 1 ashcan kept filling.

Murray did swish a 3-pointer at the end of the first quarter and put Denver ahead 38-36. Then the Lakers’ defense arrived at the scorer’s table. Mason Plumlee got Denver’s first bucket of the second quarter, with 6:45 on the clock. The Lakers were busy enough to earn 25 free throw attempts, in that quarter alone.

“They came out and hit us in the mouth in the first quarter,” Rondo said. “We had to go back and hunker down with our defense. But we had a couple of days to hone in on their tendencies.”

And Howard, who was exiled in the Houston series because there was no one with which to see eye-to-eye, was asked for 16 minutes and gave back 13 points, along with 94-foot focus.

“I told him he would be the X factor,” Rondo said.

“I liked his energy,” coach Frank Vogel said. “We didn’t plan to start him in the second half going in, but I watched him and thought he could have an impact.”

But another number might have been the most crucial, looking at whatever basketball remains. The Lakers only needed LeBron James for 31 minutes, and he was able to slip off the bench before the final buzzer to get the usual postgame tune-up.

Or maybe he was checking for a recount of the MVP vote, won by Giannis Antetokoumnpo for the second consecutive year. James was second.

“It ticked me off,” James said, using stronger language, “to be honest. There were 101 first-place votes and I got 16. But don’t get it twisted. I’ll go back to my room tonight and we’re up 1-0 in the Western Finals. I’m fine.”

Other, smaller players in the area might have had a rougher night.