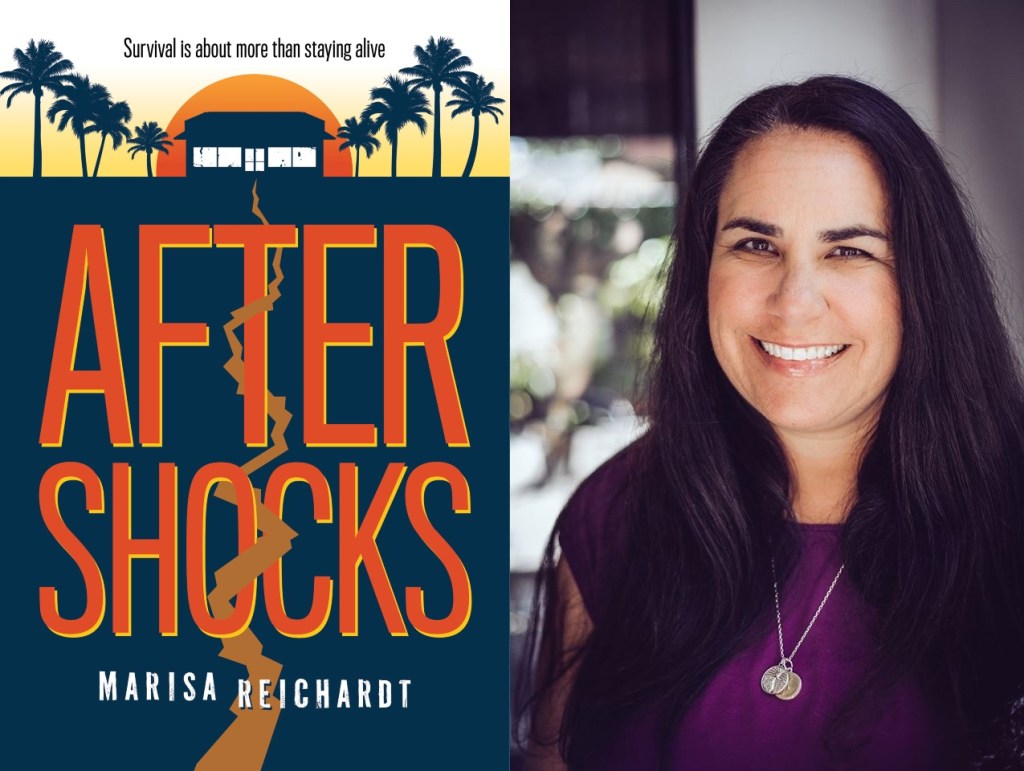 Novelist Marisa Reichardt has spent her life in Southern California. She grew up in San Diego, moved to Los Angeles in 1995 to attend graduate school at USC and currently lives in Hermosa Beach.

Like other lifelong Californians, she’s lived with the threat of an earthquake — The Big One — looming in the background. “There’s this idea that we sort of survive by not thinking about it,” she says by phone from her home (before the late-night 4.6 quake on Sept. 18), “But not thinking about it isn’t doing us any favors.”

Reichardt researched and contemplated the possible aftermath of a very large earthquake to write “Aftershocks.” The YA novel, which will be published on September 29 through Amulet Books, is the story of a high school water polo player who is in a laundromat when a 7.8 earthquake hits, trapping her and a guy not much older than she is, under the rubble.

“Aftershocks” underscores a truth about earthquakes that is often ignored in our attempts to prepare for one: We simply don’t know where we’ll be when one hits.

“The idea that it’s going to be easy and we’re all going to be together, I think, is something that we do to make ourselves feel better,” Reichardt says. “But I think that my greatest fear is being separated and then also being in a position where no one would know where to find me or look for me.”

In “Aftershocks,” Ruby is going through difficulties with both friends and family. This earthquake will force her to rethink her relationships. Meanwhile, the disaster will bring her together with a stranger, Charlie, who is also going through hard times. The two will connect as they hope and wait for someone to find them.

“I would like to think that if they did have the opportunity to meet outside of something this tragic they would also connect,” Reichardt says of her main characters. “But I think that sometimes it takes extreme circumstances for us to find people that we connect with. We’re not out there looking for it. It happens when you’re not expecting it. That’s what I feel like Ruby and Charlie’s relationship was something that was unexpected but special.”

Ruby’s sport — water polo– also plays a significant role in the story. Reichardt had long wanted to write about a water polo player. Her husband is a teacher and water polo coach and the two met when he was coaching Reichardt’s brother.

“I’ve been around water polo players and water polo teams for the past 30 years,” she says. But she needed just the right story for this type of athlete. “Aftershocks” was it. “I’m going to put this person in a situation that’s going to take enormous mental and physical strength; this is the time for a water polo player,” she explains.

At the book’s core is an understanding of the devastation a large earthquake can cause. For research, she looked into crises such as 9/11, Hurricane Katrina and the war in Syria. She talked to an ER doctor in San Diego about strategies for handling such a massive event and a friend with a Ph.D. in geology who had specialized in studying earthquakes.

Then Reichardt would try to figure out just how Ruby might move while trapped. The author would lie down on the floor, contorting into positions that she had written for her character. How much space would be above her? How would she move if she were trying to get her phone out of her pocket?

“I would always feel terribly guilty,” Reichardt recalls. “I would get into those positions and I would feel panicky and think, how did I do this to somebody?”

It was a book that Reichardt wrote quickly. “I think it was because I was in a hurry to get out of there,” she admits.

“Aftershocks” isn’t just about waiting for the rescue. Reichardt also looked at what might happen when people, especially minors, need medical attention. The closest hospital, the one that family members would immediately think to check, might not be functioning. Communication channels might be extremely limited, or non-existent.

“How do we reunite minors?” Reichardt asks. “You can’t just send them out on the street and say good luck. There has to be some sort of a system in place.” That’s where she took some liberties, trying to imagine how this situation would unfold.

Reichardt, whose debut novel, “Underwater,” was published in 2016, often focuses on teenagers handling particularly difficult situations. “I really have a great respect for teenagers,” she says. “I think that they’re constantly questioning the world and their place in it, so the idea of writing stories that are specific to them and their circumstances is what my main draw is.”

Her next book, which will be published in February, is called “A Shot of Normal.” It’s about a 16-year-old girl who gets the measles and then fights her anti-vaxxer parents to obtain vaccinations for other diseases.

As for “Aftershocks,” Reichardt says, the process of writing it has helped her better prepare for one. “I have earthquake kits now. We have a family plan. My furniture is hooked to the wall,” she says. “I can’t say that I’m totally, mentally prepared, but I feel like I’ve done what I can.”