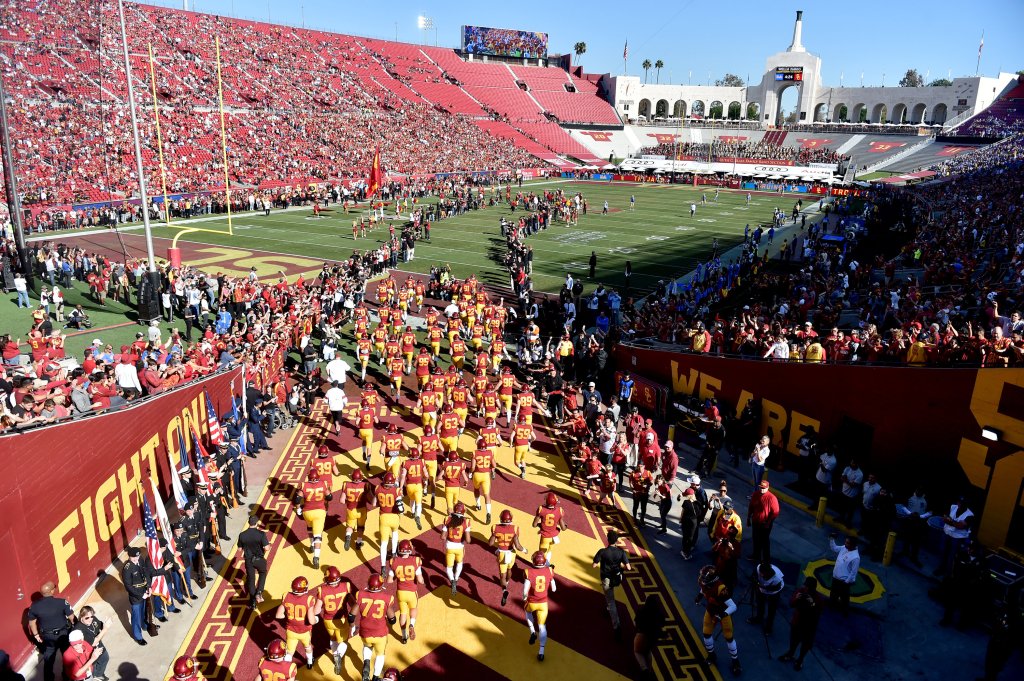 Pac-12 football took a major step toward returning to play Wednesday as the governors of Oregon and California lifted the state restrictions preventing half the conference from conducting normal practices.

If all goes well, the conference could restart its football season in late October or early November, bringing it into general alignment with the Big Ten, ACC, SEC and Big 12 during the season’s finishing stretch.

The next step for the Pac-12 teams in California and Oregon — and it’s believed to be manageable — is coordinating with their local health officials on safety protocols for practice and competition.

Two counties in California (Santa Clara and Los Angeles) that are home to three of the Pac-12 teams have already signed off on allowing the NFL franchises within their jurisdictions to practice and play.

In addition, clearance from governors Gavin Newsom of California and Kate Brown of Oregon should facilitate the local-level process by allowing authorities to focus on protocols that would be specific to the football teams and not tied to broader guidelines for recreational and athletic activities within their counties.

Essentially, the six teams have been granted exemptions from on high.

“The Pac-12 welcomes today’s statements … that state health officials will allow for contact practice and return to competition and that there are no state restrictions on our ability to play sports in light of our adherence to strict health and safety protocols and stringent testing requirements,” the conference said Wednesday afternoon.

“Our California and Oregon universities will now each individually reach out to their relevant county public health officials to achieve clarification on what is required to receive the same clearance to resume contact practice and competition.”

The statement came at 4 p.m. and ended a furious day of news that began with the Big Ten’s announcement that it will begin an abbreviated football season on the weekend of Oct. 23-24.

Whether the Pac-12 can restart that quickly is uncertain.

The conference is awaiting the arrival of rapid-response antigen tests at the end of the month, and several days may be required to get the program fully ramped so that players can be tested daily.

In addition, the Pac-12 medical team believes that at least one month of practice is required for the players to prepare for the season, although there is sure to be heated discussion with the coaches about the specific number of practice days needed.

Those issues make an aligned restart with the Big Ten unlikely but could put the Pac-12 in position to begin play on Halloween, if everything moves smoothly.

The first Saturday of November could be more realistic, with a six-game regular season culminating with the Pac-12 championship on Dec. 19.

With only seven or eight games on its resume, the champion probably wouldn’t be considered for the College Football Playoff.

The Pac-12’s best hope to a berth is disruption elsewhere:

If the SEC, Big 12 and ACC are forced to postpone a handful of games because of coronavirus outbreaks, the CFP could move to the second half of January, allowing the Pac-12 to add games and field a legitimate contender.

The third piece of news Wednesday came down from NCAA headquarters in Indianapolis, where the Division I Council approved a revised basketball calendar with Nov. 25 as the first day of the regular season.

The Pac-12 has suspended basketball competition until Jan. 1 but, in light of the developments in COVID-19 testing, is expected to re-evaluate the decision.

In order to start play on Nov. 25 — and given the time required for players to prepare for the season — teams would need to commence practice in late October.

The Pac-12 athletic directors and football and basketball coaches have meetings scheduled over the next 48 hours.

On Friday, the presidents and chancellors will convene. Although scheduled before Wednesday’s events, the session will dive into possible restart dates for both sports.

A source said any decisions — whether by formal vote or general consensus — would come with the caveat that local health officials remove restrictions currently in place.