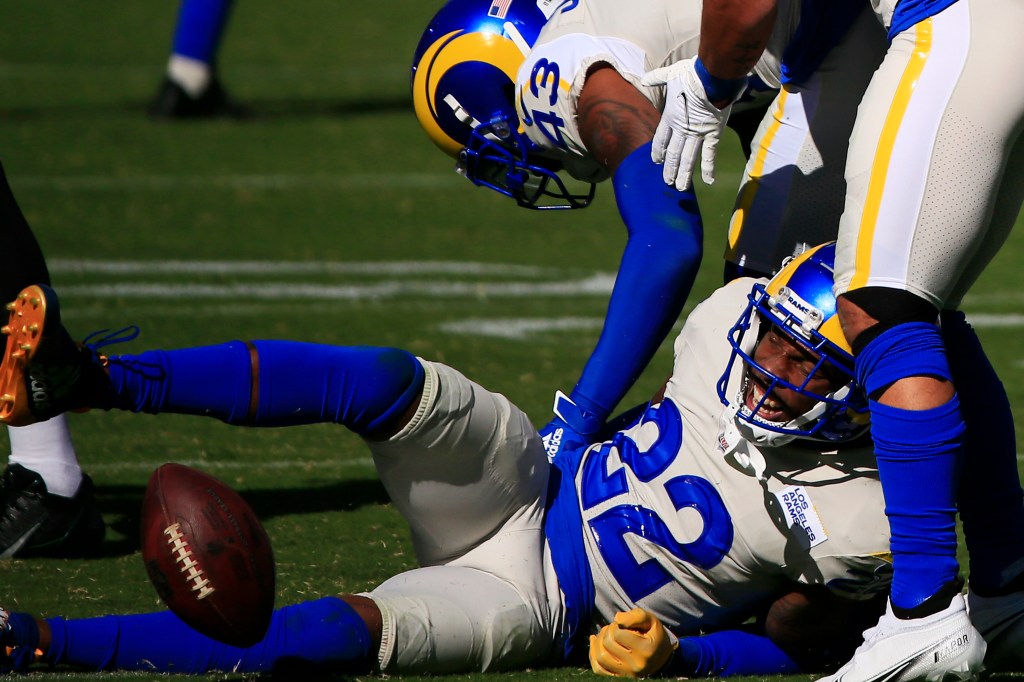 So far, the 2020 Rams are handling everything the world throws at them.

That’s saying a lot, because in the season’s first two games, the world had Dak Prescott and Carson Wentz doing the throwing.

A main reason the Rams are 2-0 is their remade pass defense has faced two of the NFL’s most dangerous quarterbacks and passed the test with flying colors.

Sunday, you could credit a flying Darious Williams, as well as a diving Troy Hill, just to name the defensive backs who made the pivotal and final interceptions Sunday in Philadelphia.

In the locker room after the 37-19 victory over the Eagles, coach Sean McVay awarded game balls to quarterback Jared Goff, tight end Tyler Higbee and Hill – and surprised Hill by giving him the last word.

Week 3 will bring a new challenge for the secondary in the person of Josh Allen, the Buffalo Bills quarterback who leads the league in passing yards. The unbeaten teams play at Bills Stadium on Sunday – the Rams’ second straight trip east for a 10 a.m. Pacific-time kickoff.

So far, though, so good.

It was hard to know what to expect from the defense. It had a new coordinator in Brandon Staley, with a scheme that prizes players multiple roles. And it relied on five linebackers and defensive backs who’d never started more than three games in a season at their positions.

One of those is Hill, who had a breakout year as a cornerback in 2019 but was switched to slot corner for 2020 while Williams took Hill’s old spot opposite Jalen Ramsey.

“I’m still learning. It’s my first time really playing nickel (back) in my career, but I felt it was a great opportunity when the coaches came and presented it to me as my position this year,” Hill said Monday.

Hill, 29, remembered advice from a college counselor at Oregon that opened his eyes to accepting different roles.

Waived by the Bengals and Patriots before he won a job with the Rams, Hill sounded touched to know he’d earned McVay’s postgame honor.

“It was one of those moments where I can really take it in and say I’m living the dream,” Hill said. “I give all the glory to God for that, because I came from nothing. A lot of people doubt, but I’m still working my way up, and I’m grinding every day.”

A week before at SoFi Stadium, Hill jumping into a passing lane was cited by Staley as the key to an 11-man effort that produced defensive end Michael Brockers’ important sack of Prescott.

Coach Sean McVay said Hill’s instincts were a factor in deciding to switch him to the slot after the Rams declined to pick up the option on Nickell Robey-Coleman’s contract.

“We’re doing a couple of things differently schematically that do stress that position, and I think Troy has done an outstanding job,” McVay said.

“When you look at all the nuances that we’re asking of him, and how he’s played over the first couple of weeks, it’s definitely been a good move.”

Hill seems as delighted by the rise of Williams, rookie Jordan Fuller – starting at safety alongside John Johnson – and inside linebackers Micah Kiser and Kenny Young.

“They stepped up big,” Hill said of the additions to the defense led by Ramsey, Johnson and lineman Aaron Donald. “Darious doesn’t get a lot of attention, and he got a big pick at a big moment in the game. They were driving, and he gave us our momentum back.”

Williams said Wentz’s pass for J.J. Arcega-Whiteside was a play in which the Rams coaches had prepared their players well.

“Our coaches do a great job of that. They give us the hardest things that we’re going to see, (and) things that we may or may not see, and that translates onto the field,” Williams said.

Because teams rarely target the receivers Ramsey is covering, Williams and Hill know more work is coming their way.

“We’ve gotta be on our screws. Now everything’s going to come through us,” Hill said. “That’s kind of a competitor’s dream in a way.”

It’s wise to reserve judgment about some of what has gone right for the Rams in their 2-0 start, but the secondary’s success seems legit.

The Rams held Pro Bowlers Prescott and Wentz to a combined 73.6 passer rating, the second-lowest by any defense this season. They’ve given up one touchdown pass, a short Prescott toss that Ezekiel Elliott turned into a 19-yard score. They and the Ravens are the only teams to hold both of their opponents to less than 20 points.

“We know that there’s a long season,” McVay said. “Let’s see if we can take it to a Buffalo offense that’s been playing really good through these first couple of weeks and a quarterback (Allen) who’s red-hot.”