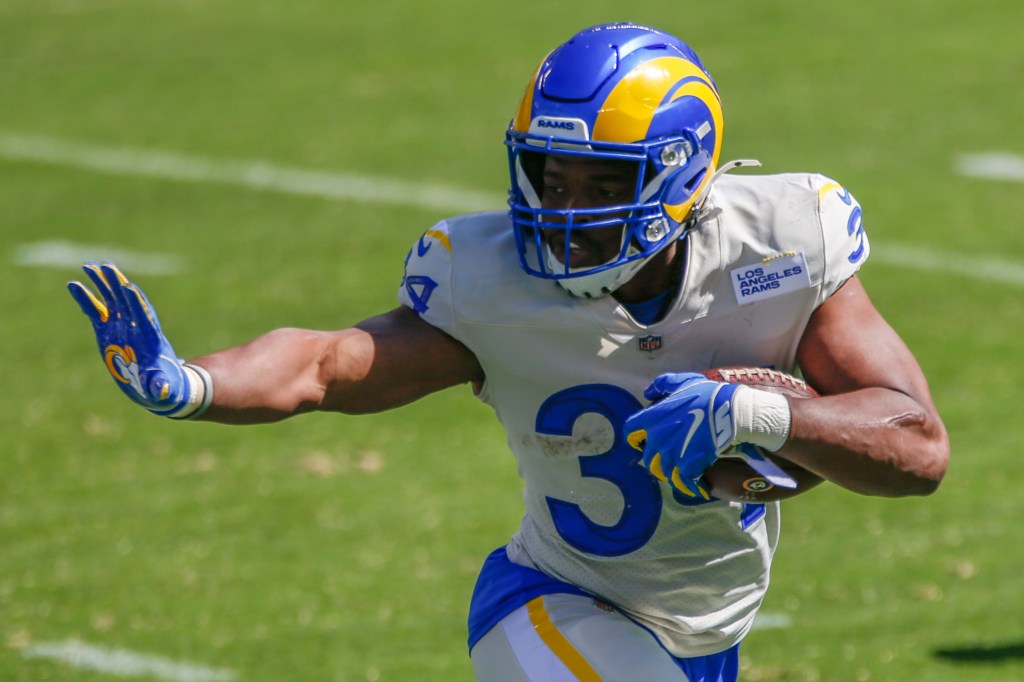 The Rams are confident their running back “committee” can make the ground game go.

The question is if the committee will ever be healthy enough to convene a quorum.

After Cam Akers and Malcolm Brown came out of the 37-19 victory over the Eagles in Philadelphia on Sunday with injuries, all three backs have already been dinged, and the season is only two games old.

First, Darrell Henderson’s training-camp hamstring pull limited him to three carries in the Week 1 win over the Dallas Cowboys.

Those aren’t the Rams’ only injuries. Left guard Joe Noteboom strained a calf early in Sunday’s first half and could go on injured reserve, McVay said. Cornerback Darious Williams has Achilles tendonitis and is likely to sit out practice Wednesday, the coach said.

Believably or not, McVay said Akers, Brown and Williams all could play this Sunday when the Rams (2-0) face the Bills (2-0) in Buffalo.

Akers, the rookie who started the Rams’ first two games, was hurt on his third carry in Philadelphia and missed the rest of the game.

“I feel like it’s better than a fractured rib because it’s not actually the bone,” McVay said. “He took a good shot there. He’s a tough kid.

“It is something that is day to day. He’ll be able to monitor that, and there is a chance that he’s going to play, for sure.”

Brown’s broken finger knocked him out late in the Philly game.

McVay said Brown had the bone set Monday and will be able to play while wearing a splint.

With Akers and then Brown missing big parts of Sunday’s game, Henderson took over to run for a career-high 81 yards and catch Jared Goff passes for 40 more.

Henderson said Monday that he is “almost” over his hamstring injury, which cost him two weeks of practice in late August and early September.

“It was a setback that made me work even harder. I took my time in rehab and made sure I’m over it,” Henderson said.

The second-year player who was third on last year’s depth chart behind Todd Gurley and Brown can probably look to more heavy lifting Sunday, given the others’ injuries and the fact the Rams coaches seem to be going with the hot hand in choosing their lead back from series to series.

The Rams’ injuries are not as serious as the ones that hit some other NFL teams in Week 2, including the knee injuries to San Francisco 49ers defensive end Nick Bosa and New York Giants running back Saquon Barkley.

“I do feel fortunate that we’ve been able to stay relatively healthy,” said McVay, who didn’t think the lack of preseason games in the year of the COVID-19 pandemic was necessarily a factor in the league’s spate of injuries.

But they’re the kind of injuries that change plans, especially the ones at running back.

McVay said Williams should be OK for Sunday if he skips the first practice of the new week to rest his heel.

The news of Williams’ injury means he was playing through pain when he made his flying interception of a Carson Wentz pass in the end zone to stop the Eagles’ momentum.

Noteboom is hurt for the second straight year, after a knee injury cost him most of 2019. McVay said the Rams will decide whether to put the guard on IR, which would keep him inactive for at least three weeks.

David Edwards, who started seven games at right guard during the offensive line’s rash of injuries last season, took over from Noteboom at left guard in Philly and will start in Buffalo, McVay said.

Sunday marked McVay’s 35th win in his 50th game as Rams coach. The only coaches in team history with more wins through 50 games were Chuck Knox (40) and George Allen (37). Ray Malavasi, John Robinson and Mike Martz won 32 of their first 50. … The Rams and their NFC West rivals are 6-0 against opponents outside the division. … The Bills were favored over the Rams by 2 1/2 points Monday afternoon. The Rams covered the point spread in their first two victories.