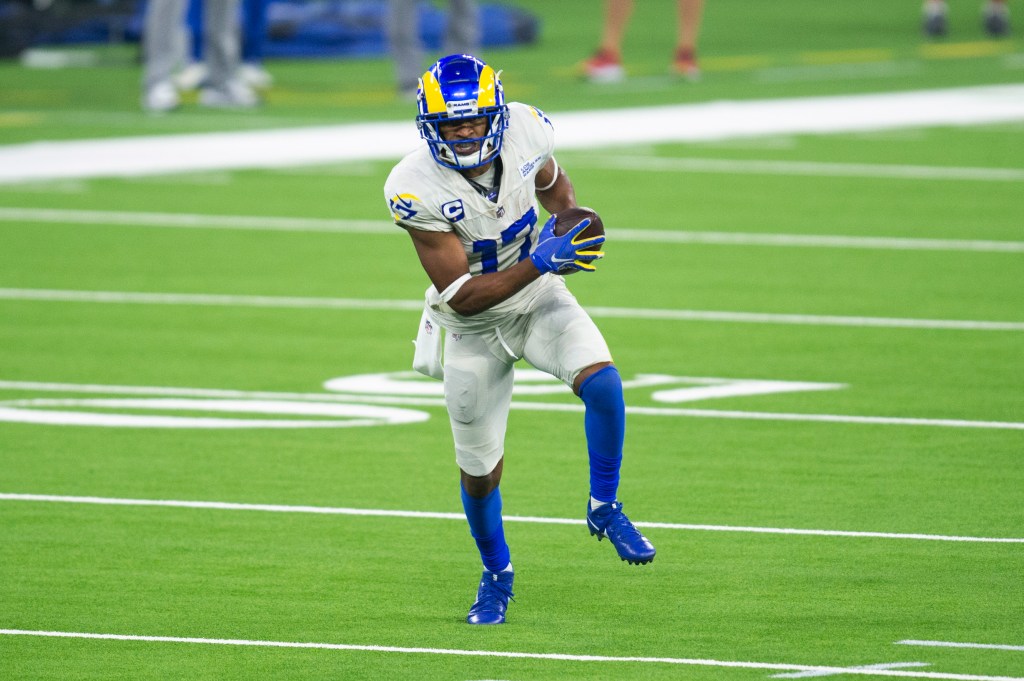 THOUSAND OAKS — Robert Woods said he was happy to see fellow wide receiver Cooper Kupp sign a rich contract extension with the Rams last week. But there was a catch.

It made Woods, the Rams’ most underpaid player, even more eager to work out a new deal of his own.

Thursday, the player and the team sounded close to getting that done.

Woods, the former Serra High (Gardena) and USC star, said he hopes to sign an extension as early as Friday, or at least before the Rams (1-0) play their second game of the season Sunday on the road against the Philadelphia Eagles (0-1).

“Just trying to get it done and out of the way and focus on the season,” said Woods, saying Rams coach Sean McVay “kind of reassured me that a deal would be getting done this week.”

“I know they finished up with Cooper’s before Week 1,” Woods said. “Now the time’s there to get it done.”

Kupp’s three-year, $48 million extension through 2023 was announced last Saturday, the day before the 27-year-old began the final season in his four-year rookie contract.

“Just production, being up there with the top guys, catches, yards, leading with yards after catch. Just being able to do my job at the elite level and just trying to have the contract to say so,” Woods said.

More important, his $6.8 million average salary is only 37th highest among NFL wide receivers. Good money, but hardly what he has earned with the 11th and 14th highest yardage among wide receivers the past two seasons, 1,219 on 86 catches in 2018 and 1,134 on 90 catches in 2019. ProFootballFocus.com gives Woods its 11th best grade at the position since 2017, praising his route-running, rare drops and knack for explosive plays — and leaving out his contributions as a run blocker.

But Woods leads the team in all of the receptions and yards categories in the four seasons the duo has played together.

And he led with 119 yards from scrimmages on six catches for 105 yards and one run for 14 yards in the Rams’ 20-17 victory over the Dallas Cowboys last Sunday.

Signing Woods as a free agent from the Buffalo Bills was part of creating the offense led by  Goff’s passing and McVay’s coaching.

“Now you find yourself in an elite situation where you’re finally able to do what you’re capable of. Now it’s time to get paid what I’m capable of being paid, up there with the best of the best.”

“Robert and Cooper have been pillars of what we’ve done the last few years,” McVay said. “Great to be able to get Cooper under contract — so happy for him. You can expect to see something similar down the line here very shortly, we’re working towards (that), for Robert.”

McVay was asked if another big contract fits under the Rams’ salary cap.

“It does,” he said without hesitation.

On the subject of whether the Rams can afford another extension, Woods said with a grin: “Denver’s doing well, the Nuggets.”

Woods played down a connection with Kupp’s contract.

But he added: “We’re all receivers. We like when that number is high. Keep that receiver market going well.”

It’s official: The Rams have the youngest team in the NFC and are up there with Jacksonville and Miami for youngest in the league, according to stats on Week 1 rosters put out by the NFL Thursday. The Rams are third-lowest in the league in average age (25.13) and average experience (3.2 years), and have the second-most first-year players (14) and second-fewest players 30 and older (three). … Tight end Gerald Everett was back on the field after missing practice Wednesday with a back contusion. … The NFL’s COVID-19 protocols reduce team travel parties from 110 to 70, in addition to players. “There’s a lot of people that are instrumental in our operation that will have to be left behind,” McVay said.