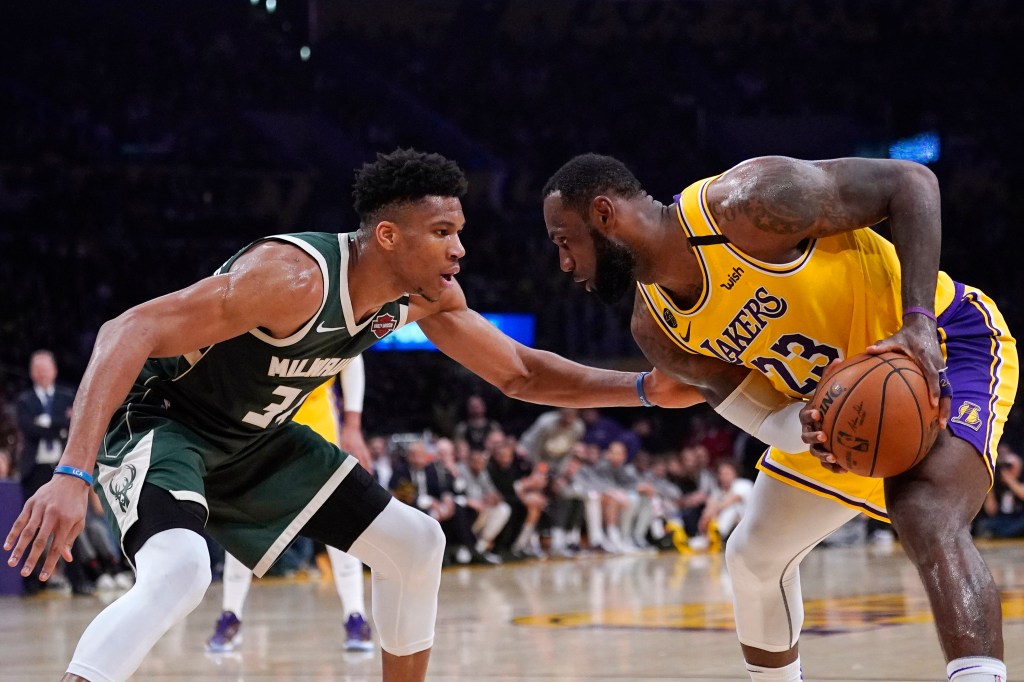 Editor’s note: This is the Saturday, Sept. 19, edition of the Purple & Bold Lakers newsletter. To receive the newsletter in your inbox, sign up here.

Yes, because reporters were asking, LeBron James did take issue with this season’s MVP voting.

“Pissed me off,” he said after the Lakers’ Game 1 victory over Denver in the Western Conference Finals …  which followed Friday’s announcement that James finished second in MVP voting to Milwaukee’s Giannis Antetokounmpo, who garnered 85 first-place votes to James’ 16 to win the award for the second consecutive season.

“That’s my true answer,” James continued, in a bout of jarring honesty. “It pissed me off because out of 101 votes, I got 16 first-place votes. That’s what pissed me off more than anything.”

I was one of the 16, and I’ll tell you why. After I tell you that it was a strange thing to be listening, via Zoom, to James chastising voters – the NBA’s global panel of sportswriters and broadcasters, of which I was invited to be a part – for being more concerned with “narration mode, the narrative.”

And that James and I agree on more than the fact that he was due more than 16 first-place votes. Like him, I’m “not saying that the winner wasn’t deserving of the MVP,” and furthermore, concur that “Giannis had a hell of a season.”

As in, Antetokounmpo posted the best Player Efficiency Rating (PER) in history (per basketball-reference.com), and he did it for the team with the best record through March 11, the period of pre-coronavirus time on which voting was based.

That was enough for most voters.

But as I stewed over both guys’ gaudy numbers, I couldn’t help but feel that those didn’t adequately gauge James’ value – to his team, his league, the world. To steal a term from the currently beleaguered Clippers coaching staff, there are things about basketball that are “unstatable.”

For sure, Antetokounmpo’s 29.6-point scoring and 13.7-rebounding averages together were stupid. But so was James infusing the Lakers’ offense with a league-leading 10.6 assists per game to complement his own 25.7 points per game.

James’ measurable impact absolutely put him in the conversation with Antetokounmpo.

I can point out, for example, that the on/off offensive rating illustrates how critical James was to the Lakers: With him on the floor, calling the shots and controlling the action as a 6-foot-9, 250-pound point guard, they were 8.1 points better than when he was off of it. Comparatively, when Antetokounmpo was wreaking havoc on the court, the Bucks were were 4.4 points better.

Also: I’ll take the Bucks’ 53 wins (through March 11) in the East and raise you 49 wins in the West. (Remember when people used to knock James for playing in the weaker East?)

Antetokounmpo still might have an analytical edge, all things being equal, if you focused on defensive rating, defensive win shares, box plus/minus. But all things aren’t equal, because he doesn’t perform under nearly the pressure that James does, nor does his play have the same impact.

As Draymond Green put it recently during an appearance on TNT, James “resurrected the Lakers franchise, that has to stand for something.” Maybe it’s my West Cost bias, but I think it counts for a ton.

No active player means more to the NBA: James isn’t only the Lakers’ leader, he’s the spokesman for the league – and while it’s at its most visible in terms of social activism. He’s one of the most famous people on the planet. And, at the end of the day, he’s also arguably the best in the game, capable of dropping 40 points or 19 assists on any given night, or dictating the outcome in any other number of ways.

I appreciated the value of all that during the regular season and, honestly, I appreciate it even more now, after watching closely as the Clippers collapsed in their second-round series against Denver. Paul George acknowledged: Being a favorite is different.

And it’s what James has experienced, basically, for his entirety of his career, when he’s won four MVP awards but was stunned, in Year 17, to receive only 16 votes.

But don’t get it twisted, he said, his arms folded across his chest, “I was pissed off at the reaction earlier when I saw it. I’m absolutely great now. I’m going back to my room, drink some wine and sleep very well tonight.”

I think I will too.

Editor’s note: Thanks for reading the Purple & Bold Lakers newsletter – most of which are by reporter Kyle Goon, who is among the few reporters with a credential inside the NBA bubble. To receive the newsletter in your inbox, sign up here.