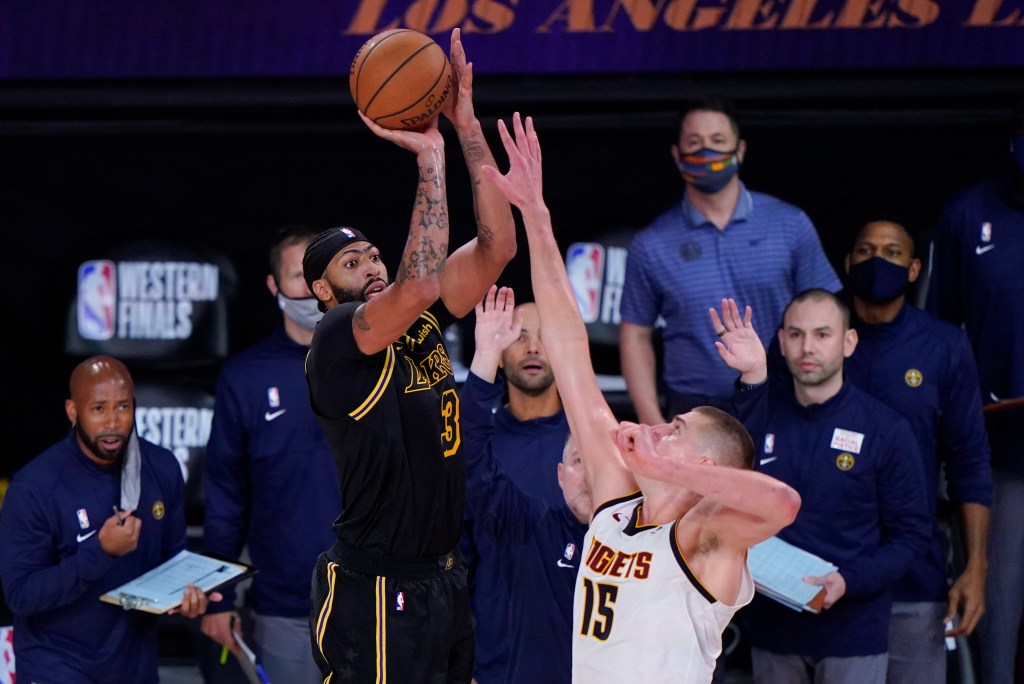 LAKE BUENA VISTA, Fla. >> Between the best two big men in the league, it came down to who had the last shot.

It was Anthony Davis, curling around the perimeter, stepping back and nailing a game-winning three — the Lakers’ second over the Nuggets in the NBA bubble — that made the difference in a stunning, buzzer-beating 105-103 Game 2 win to take a 2-0 lead on their upstart Denver challengers.

Davis finished with 31 points, answering the 30 points of Nikola Jokic, including the go-ahead basket the Serbian center had scored just 20 seconds earlier.

It was these Nuggets that the Lakers had been told to fear, the ones who became the only team to come back from two 3-1 deficits, and against the Clippers overcoming a double-digit lead every time.

They tied it finally with 9:49 left, eating up what had been a 16-point lead, and from there it was call-and-response. James put in an and-one lay-up to take the lead back. Minutes later, a Murray go-ahead bucket was answered by a Danny Green 3-pointer.

Denver kept threatening for the final minutes, including some impressive hustle plays by bench guard P.J. Dozier, who took two charges and drew two shooting fouls in the fourth quarter.

The Lakers seemed to grasp a definitive moment of separation on Davis’ stepback 3-pointer, giving the Lakers an eight-point lead with three minutes remaining. But the Lakers couldn’t keep producing points (James had just six himself in the second half), and Jokic knocked back a rainbow 3-pointer to bring his team within a point. Then after a Jokic tip-in, Davis answered with his own floater with 26 seconds left to go up by a point.

The chippiness from Game 1 carried over into Game 2, even if the rowdy Lakers’ bench was more tightly policed. In the first timeout, referee Billy Kennedy came to the corner to warn the Lakers bench about getting too over-the-top on every call. By the second quarter, the crew had doled out technical fouls to Howard, who coursed with energy from his check in to body up Jokic, then to assistant Phil Handy, who was but one of a chorus of loud voices from the sideline.

Initially the Lakers’ top concern was if anyone besides James could score. He notched the first 12 points of the game for the Lakers, single-handedly keeping pace with the Nuggets as his teammates started 0 for 12 from the field. It wasn’t until seven-and-a-half minutes in that Green finally made a fast-break lay-up.