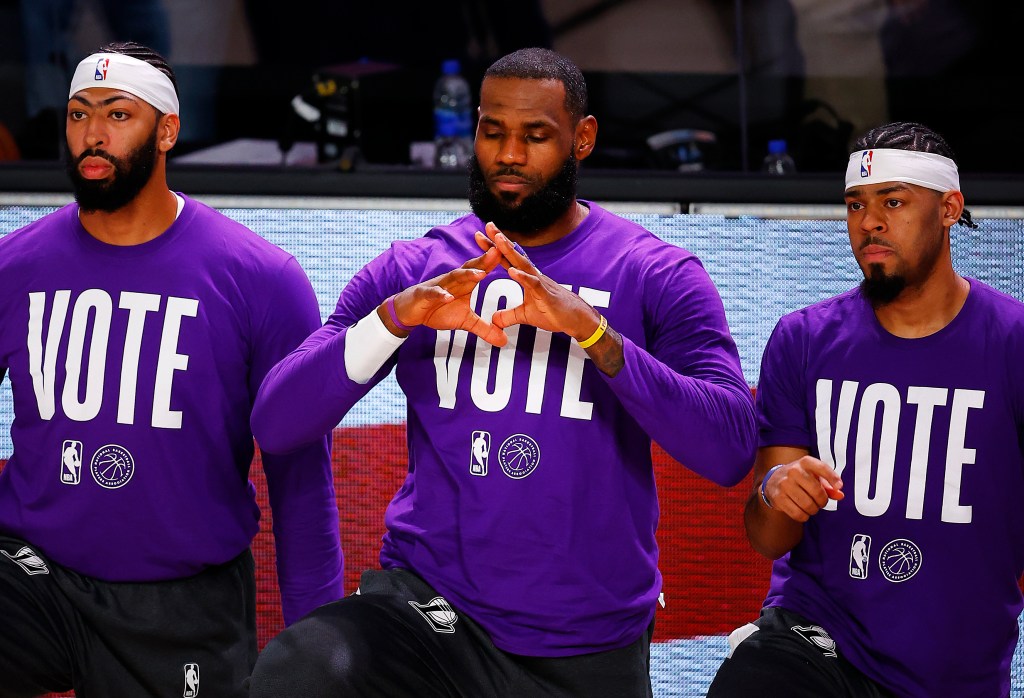 Whoever needed to hear it, LeBron James put it plainly Tuesday: “I do not condone violence towards anyone,” the Lakers star said. “Police, Black people, white people, anyone of color, anyone not of color, because that’s not going to ever make this world or America what we want it to be.”

On Sept. 14, L.A. Sheriff Alex Villanueva told the Associated Press that he blamed sports figures, as well as elected officials and civic leaders, for “fanning the flames of hatred,” saying they instead ought to emphasize trust in the criminal justice system.

Two days before he made those comments, an unknown gunman ambushed two Compton sheriff’s deputies, both of whom reportedly were discharged from the hospital Monday, and who face a “long road to recovery”, officials said.

James has for years been an outspoken advocate for racial justice, and he and his NBA colleagues have been especially active on social issues, including police abuse, this summer — including in the bubble in Lake Buena Vista, Florida.

The messaging from the NBA, as well as athletes in other leagues and sports, has gotten the attention of much of the nation, including Villanueva — who last week was called on to resign by several city and county officials, including county supervisors Mark Ridley-Thomas and Sheila Kuehl, Los Angeles City Councilman David Ryu, as well as community activists and families of people killed by Los Angeles County Sheriff’s deputies.

Earlier Tuesday, news broke that Vanessa Bryant — the widow of Laker great Kobe Bryant — is suing Villanueva and his department over leaked photos of the the helicopter crash site where Kobe, his daughter Gianna and seven others died in January.

The embattled sheriff addressed James directly on Sept. 15, when Villanueva said in an interview on KABC Radio that he wanted to “challenge” James to contribute to the award money being offered for information on the gunman who ambushed the deputies. The attack has spurred a manhunt, with a reward of at least $300,000 reportedly being offered for information leading to an arrest and conviction.

“I know you care about law enforcement,” Villanueva said in comments directed at James. “You expressed a very interesting statement about your perspective on race relations and on officer-involved shootings and the impact that it has on the African-American community. And I appreciated that. But likewise, we need to appreciate that respect for life goes across all professions.”

On Tuesday, shortly after the Lakers lost Game 3 of the Western Conference Finals, 114-106, James was asked about Villanueva’s comments.

“I’ve never in my 35 years ever condoned violence,” James said. “Never have.”

Growing up in inner city Ohio, James said he witnessed firsthand how often Black people are racially profiled, harassed and made to fear violence from law enforcement personnel. He also spent enough time near cops in high school to know “they are not all bad,” he said.

“I also know what’s right is right and what’s wrong is wrong,” the 35-year-old said. “… when you see the videos that’s going on and you can see not only my hometown, but all over America, you continue to see the acts of violence towards my kind, I can’t do nothing but to speak about it and see the (common) denominator.

“But not one time have I ever said, you know, ‘Let’s act violent towards cops.’ I just said that what’s going on in our community is not OK, and we fear for that and we fear for our lives. It’s something that we go on every single day as a Black man and a Black woman and a Black kid and a Black girl. We fear, we fear that moment where we are pulled over.”

A recent example that was front of mind for James was a situation that occurred on June 2 and was in the news last week, when Keonte Furdge filed a civil rights lawsuit against the city of Monona, Wisconsin, and two of its police officers, alleging unlawful entry, false arrest, excessive force and failure to intervene.

Furdge, 23, was handcuffed in his own home at gunpoint after police responded to a neighbor’s call about a Black man on the porch.

Said James: “You can’t tell me that’s not racial profiling, then I don’t know what the hell — or what the hell we are looking at?”

Last week, Clippers Coach Doc Rivers — who too has long been outspoken about social and political matters — also pushed back on Villanueva’s assertion that athletes are stoking tensions.

“Listen, I don’t think anyone’s fanning flames,” he said before the Clippers’ loss in Game 7 of the Western Conference semifinals to Denver. “I just think we’re drawing attention to things that are happening in our country. We don’t want any sheriffs — we don’t want anyone killed, period. So if you just stop there, we can make it a better, safer place for all. That’s what we want.”

Otherwise, James indicated he doesn’t intend to engage with Villanueva.

“I have zero comment on the Sheriff,” James said.

LeBron James to @taniaganguli on the framing that his position on police brutality incites violence against police – “I’ve never in my 35 years ever condoned violence. I do not condone violence towards anyone. That’s not gonna make this world or America where we want it to be.” pic.twitter.com/FgU5qsUlS2