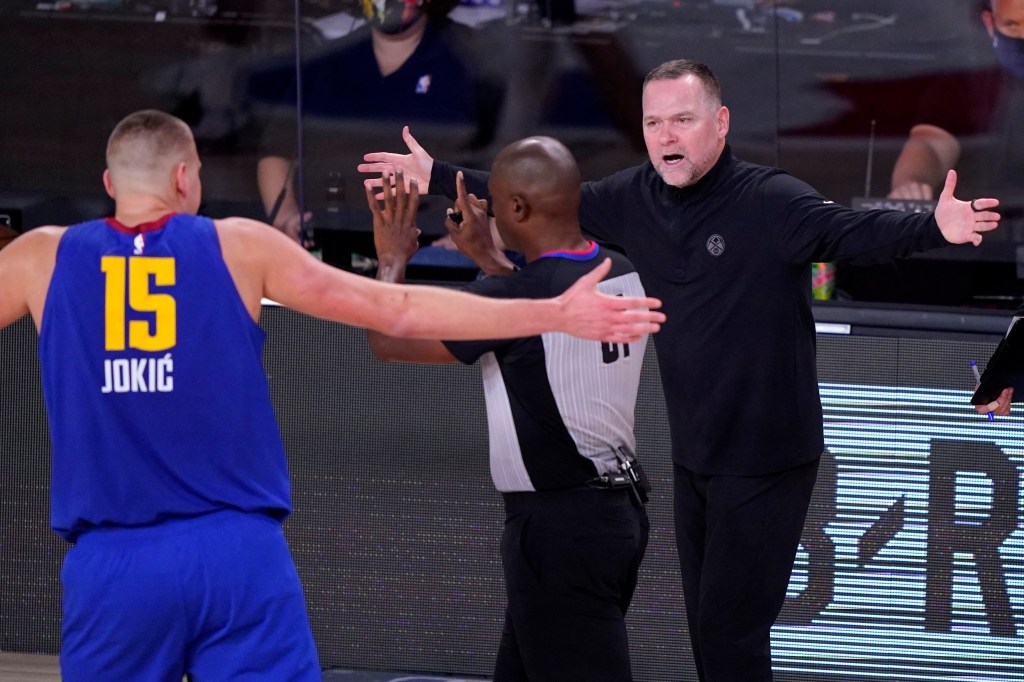 The Nuggets got punked. By King James. And by NBA refs.

Cry foul into a crying towel, if you want. Whining about life (or the refs) not being fair won’t get Denver anywhere but a one-way ticket out of the playoffs.

After getting dunked on and dissed during a 126-114 loss in Game 1 on Friday in the Western Conference Finals, it’s obvious that the league regards the Nuggets as little more than props in this Lake Show, starring James and Anthony Davis, who hammered Denver with 37 points.

It was so ugly and frustrating the entire fourth quarter stunk like garbage time.

“I’m not going to sit here and blame it on the refs. That’s not what I’m doing,” Nuggets guard Jamal Murray said. “We’ve got to play through it and earn their respect.”

In 2020, when life’s not fair, in any way, it’s easy to think the world is conspiring against us. But think that way and it’s nearly impossible to overcome. The refs did the Nuggets no favors in this L. But Murray didn’t whine after the game. He’s a winner.

Lobby the refs all you want. But beg for their mercy? That’s not how it works in this league. Crying foul gets an up-and-coming team nowhere.

Yes, the Lakers attempted two dozen foul shots in the second quarter alone, when Los Angeles took control of the game, with a big assist from a very friendly whistle.

“They went to the foul line 24 times in one quarter. Twenty-four times in a quarter, which is an extremely high number, on pace for 100,” said Nuggets coach Michael Malone, who watched the refs with the same disbelieving eyes as many fans back in Denver.

There is Sistine Chapel artistry to the way James plays basketball, but when he lowers shoulders that are hard as anvils on a drive to a basket, a defender would have an easier time giving a hug to a bull in Pamplona than slowing down the King.

With the Nuggets employing their classic rope-a-dope strategy, L.A. blew them out of the Magic Kingdom with a 17-1 start to the second quarter. Maybe the worst moment in the period, at least in the eyes of Denver fans, was when LeBron made a dent in Murray, hit a shot and was given a free throw, as well.

Malone formally protested, demanding a video review by the refs. I get the idea of standing up for your guys. But you ain’t going to win that battle against the King. He who has the rings gets the calls.

Malone’s objection? Denied. Bron sank the free throw to put the Lakers up 56-41 with six minutes, 25 seconds, remaining in the first half.

If Malone is going to complain about refs showing James too much respect, I’m afraid he is going to be miserable for as long as it lasts. And it won’t last long.

Or as analyst Charles Barkley punked Nuggets Nation on the TNT telecast prior to opening tip: “I don’t even know if they can make it a series … I tell you what, America. Lakers in five!”

Here’s what did: The Lakers shot way too often from point-blank range, taking great glee in slamming Denver with don’t-mess-with-us dunks. L.A. scored 54 points in the paint.

“We were giving up layups after scored baskets ourselves,” Malone said. “To me that indicates our sense of urgency to get back was not remotely anywhere close to where it needed to be.”

Belying his sweet Big Honey reputation, there’s a quietly stubborn competitiveness deeply embedded in the DNA of center Nikola Jokic. He won’t back down against the Lakers, as his 11 points during the opening 11 minutes of the first quarter reassured us all.

The problem? L.A. can send big bodies in waves at Joker, from JaVale McGee to Dwight Howard. This series is going to leave a dent.

If Denver is going to have any shot against the Lakers, Murray is going to have to take it. He needs to average at least 25 points per night. He scored 21 in Game 1. But it didn’t matter, because starters Paul Millsap, Jerami Grant and Gary Harris came up painfully small, shooting a meek 7-of-23 from the field.

After only four quarters in this best-of-seven series, the Nuggets are in a tough spot.

The refs aren’t going to bail Denver out.

Not only has Malone kept this team together when hope appeared gone, but he has also cracked the most memorable soundbites heard in the Nuggets camp since the prime of Doug Moe.

On the eve of this series, Malone quipped: “We petitioned the league to see if we could start the series down 3-1, save everybody a lot of time.”

The Nuggets have made us all believe that impossible is nothing. But go down 3-1 to the Lakers and it will be all over except the told-ya-so cackling by Sir Charles Barkley.