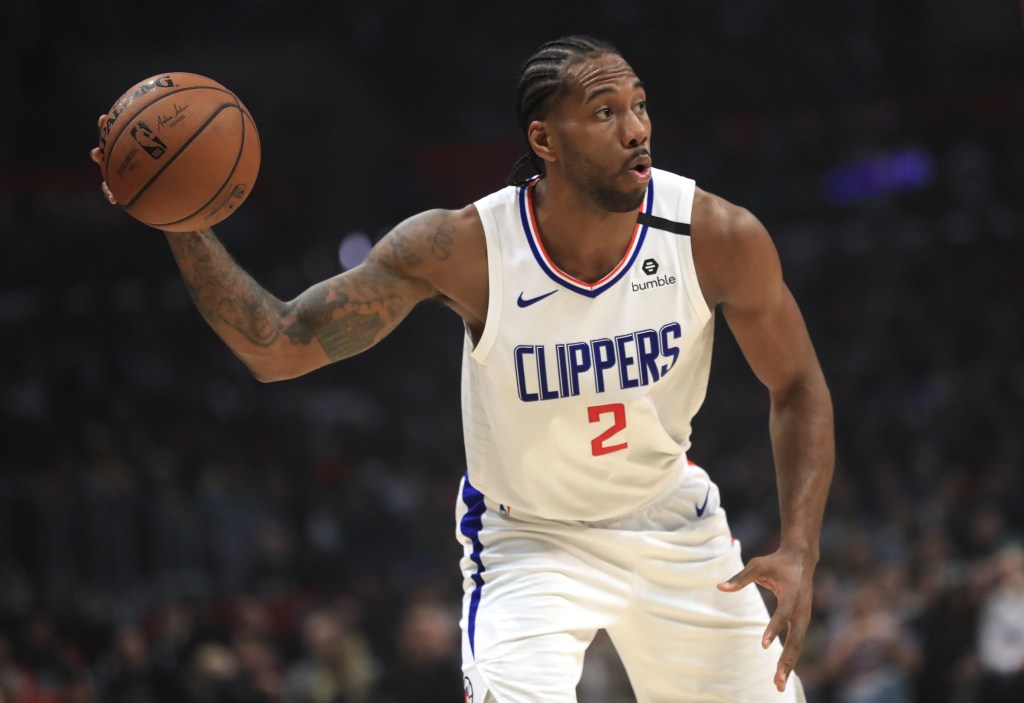 When he brought his talents to the Clippers a year ago, Kawhi Leonard arrived as a known winner, a gifted defender, a clinical scorer, the king of the good bounce.

Turns out, when the 6-foot-7 wing has the ball in his hands as much as he does on the Clippers — his 32.8 percent usage rate (a calculation of the percent of plays in which he’s involved while on the floor) rates seventh in the NBA — he’s also an effective playmaker.

Leonard’s 5.0 assists per game are a career high by 1.5 percent and represent the second-highest average on the team behind Lou Williams’ 5.7 per contest.

In Saturday’s 126-103 runaway victory over the New Orleans Pelicans, Leonard supplemented his 24 points with five assists, all of them in the first half and all of them on made 3-pointers. It was a team high and it boosted Leonard’s season total to 263, eclipsing, in just 53 games, his previous highest single-season tally of 260.

On a team with five players averaging more than 3.2 assists per game, the passing is just part of the job, Leonard said Saturday, via Zoom.

“I gotta be one of the guys that gets in the paint, passes the ball,” said Leonard, who twice this season has had 10 assists, and in five games finished with nine dimes after previously never having recorded more than eight assists in a game.

“Just really becoming that real true point guard. I have to step in that role a little bit more, bringing the ball up the floor, trying to get guys involved. That’s what I gotta do with this team.”

He’s smart about it, of course, delivering a pass to an open Patrick Beverley on Saturday just when Pelican point guard Lonzo Ball took a half-step too far toward Leonard to recover.

Another time, Leonard corralled a loose ball at center court and delivered a laser to Reggie Bullock, waiting on his periphery, who made another of the Clippers’ franchise record 25 3-pointers. There also was a textbook drive and dish to JaMychal Green in the corner, and a pass out of a double team to an open Paul George, for one of his eight 3-pointers.

“It’s been amazing,” Rivers said. “I thought he set the tone the beginning of the game. You can tell. It’s funny, he was just passing, almost overpassing at times. You look up, he still had (18 points) at halftime, then he had the assists.

“I am not a big guy to just have it all on me. If it’s not my night or my game I am willing to pass the ball and do what it takes to win. I feel like they have that culture here.”⁰
-Kawhi Leonard on his playing style blending with the #Clippers.#Clippernation pic.twitter.com/71OSky5zUc

I didn’t realize it in real time but this Kawhi Leonard pass to Landry Shamet is dumb as hell. I have no earthly idea how Kawhi even saw him. pic.twitter.com/oNo1qc1nFf

Great pass by Kawhi here, who’s been distributing all night.

Also, an incredible preseason business decision by Millsap. The veteran isn’t challenging Trezl on the roll in preseason, no sir. pic.twitter.com/NKZ4UfQrLw

Leonard’s early passing helped set up the Clippers for a successful Saturday, when they also got a noticeable lift from Beverley.

The 6-1 sparkplug again was on a minutes restriction because he’s only recently returned after being away from the bubble to tend to a personal matter. But it’s hard to limit the man’s energy on the court — including, this time, for the start of the game.

In 18 minutes, Beverley went 3 for 6 from the floor (and 3 for 5 from deep), fought for four rebounds, assisted on three baskets and made a steal — though his impact was felt beyond what was recorded in the box score, Rivers said.

“His spirit alone lifted us,” Rivers said. “He just makes so many unselfish plays. He’s incredible some of the things he does. Half the things that happen out there, he gets zero credit for in a stat sheet, yet the meaning for us on the floor is immeasurable.”