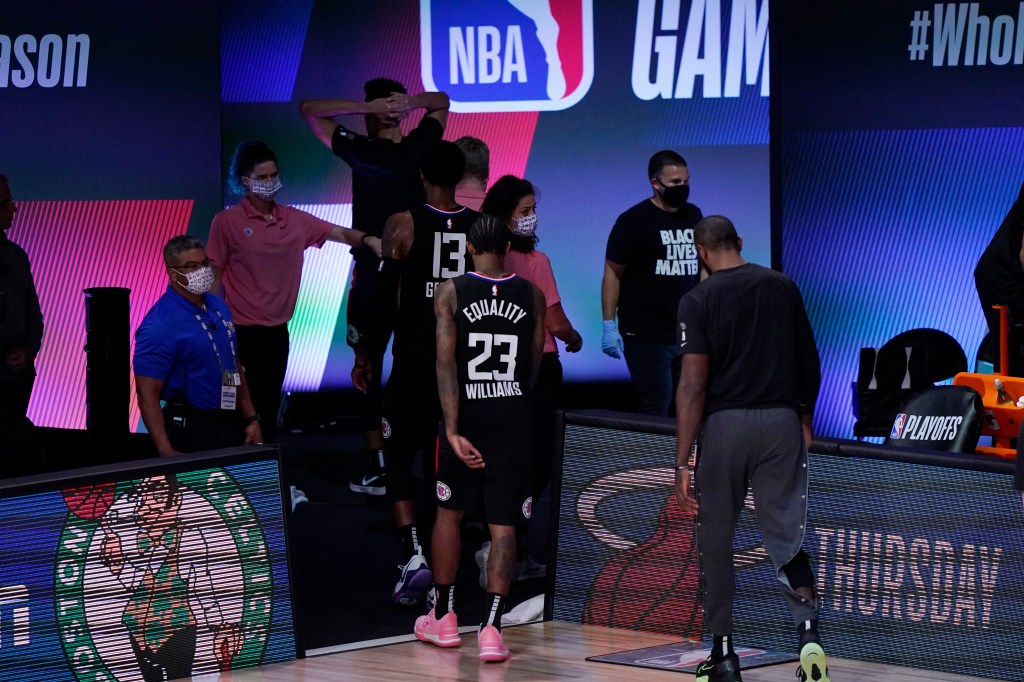 When the sun came up Wednesday – and it did, even in Clipper Nation – the landscape looked different, and yet all too familiar.

The Clippers went home before the Western Conference Finals, again. But this time they were laughed out of the bubble by NBA player Twitter after a monumental collapse in the second round of the playoffs, a tough pill for a team that carried itself with championship-caliber swagger.

Portland’s CJ McCollum was among the players who expressed amusement online during the developing Clippers’ debacle, continuing the chirping that occurred during the Clippers’ seeding-game victory over the Trail Blazers: “Yoooo @Dame_Lillard  (Damion Lillard), you got an extra villa available in Cabo?” McCollum tweeted, referencing an earlier comment by Patrick Beverley that the Blazers were bound for vacation in Cancun.

Because the Clippers, who mortgaged their future to add Kawhi Leonard and Paul George, blew a 3-1 series lead against the Denver Nuggets, who eliminated L.A. with a 104-89 win Tuesday. What’s more, the Clippers led, at one point in all three of those decisive losses, by at least 12 points.

A lot had to go wrong for that to happen, and a lot did.

In the postseason, the Clippers’ vaunted bench production tumbled to 36.5 points per game from its regular-season average of 50.3 points.

Against Denver, Coach Doc Rivers and his staff couldn’t come up with an antidote for point-center Nikola Jokic, who carved up the Clippers up for 24.4 points, 13.4 rebounds and 6.6 assists per game. Because of that, Rivers has the ignominious distinction of being the only NBA coach whose teams have blown three 3-1 postseason series leads, a list that also included Orlando’s collapse in 2003 and the Clippers’ in 2015.

Afterward, Rivers lamented his team’s lack of conditioning. Some of the Clippers missed time in the bubble because of personal issues outside, but they’d been united and mostly healthy since the start of the nearly-every-other-day postseason on Aug. 17.

“We had guys that just couldn’t play minutes, and that’s hard, you know?” Rivers said. “I mean, there were two or three times a night where we actually started getting it going and a guy had to come out.”

Yet the Clippers kept coming tantalizingly close to advancing, and each time the franchise’s first conference finals berth was within reach, they seized up.

And when it mattered most, the Clippers’ stars struggled in the bubble.

Leonard, their leading man, scored just 14 points on 6-for-22 shooting in Tuesday’s season-ending defeat. He and his co-star, George, were held scoreless in the fourth quarter. Each made only one basket in the second half. Despite averaging 7.2 free throws in the series, Leonard didn’t attempt a single foul shot Tuesday.

It was an uninspiring effort from the Moreno Valley native, whose free-agency decision last offseason had the basketball world waiting with bated breath.

Would he stay in Toronto, where he’d just won a title? Would he come home to Southern California and solidify the Lakers as the league’s new super power? Would he really pick the Clippers, an organization that had never reached a conference final but had earned wide respect since 2014, when Steve Ballmer swooped in to rescue the franchise after the NBA ended Donald Sterling’s ugly tenure as owner?

Leonard did it his way, choosing the Clippers.

He arrived with sparkling credentials, a two-time NBA champion and two-time NBA Finals MVP – accolades that will stand regardless of what happens in the future, but which, the day after Tuesday’s stunning playoff exit, can take on a slightly different tint.

Leonard won his first title with San Antonio in 2014, when he did the heavy lifting as the Spurs defeated the Miami Heat in five games, guarding LeBron James on one end and contributing key offense (17.8 points) and rebounding (6.4) on the other.

In 2019, Leonard was spectacular (28.5 points, 9.8 rebounds, 4.2 assists, 2.0 steals) lifting Toronto to its first title as the Raptors pounced on the injury-ravaged Golden State Warriors, ending their title run.

But as crucial as Leonard’s contributions in 2013 were, he wasn’t tasked with leadership duties on a veteran Spurs team that also featured all-time talents Tim Duncan, Tony Parker and Manu Ginobili. And last season in Toronto, the Raptors didn’t carry the season-long burden that comes with being a preordained championship favorite.

That changed in Leonard’s first season with the Clippers, which presented a new challenge for him and his teammates.

“First time I’ve been on a team and not been considered an underdog,” George said Tuesday night. “So it was different, but you want that pressure as a competitor, as a guy that wants to compete.”

For his part, Leonard addressed the media at the same time as Rivers, appearing on a separate Zoom stream and telling reporters that the Clippers’ on-court chemistry has to improve.

“Just being smarter,” said Leonard, who averaged 28.2 points, 9.3 rebounds and 5.5 assists this postseason. “Being able to know what to do in what situations when guys are playing us certain ways, and seeing how we can get some execution down the stretch. Guys knowing exactly where they need to be, in crunch time or situations when you can’t put the ball in the hole, those are big things that championship teams have.”

That might take some time to develop, the Clippers admitted.

“We’re looking for the long run,” said George, who, like Leonard, has a player option in 2021. “All we got from here, is to be positive … of what we can be in the future.”

Patience and optimism might have to do the trick, because the Clippers don’t have a lot of obvious room to maneuver via trades or free agency.

They secured Leonard’s commitment by finding a way to pair him with George, for whom they paid Oklahoma City handsomely, trading Shai Gilgeous-Alexander, Danilo Gallinari and a record haul of draft picks (first-round picks in 2022, 2024 and 2026, along with two first-round choices via Miami in 2021 and 2023 in addition to giving OKC the right to swap first-round picks in 2023 and 2025).

In March, they also sent a 2020 first-round pick to the New York Knicks in the trade to bring aboard Marcus Morris Sr., who, with Montrezl Harrell and JaMychal Green, will be a free agent this offseason.

They’ll get another taste of it next season.

Kawhi has never been the best player in the NBA.

The Clippers gave up their future to go ONE EXTRA ROUND. They can’t even get to the WCF b/c the “best player” gagged. This is embarrassing. He wanted Paul George. I bet you he wish he had Lowry & Siakam now pic.twitter.com/jc8bVVJi4s

My last tweet before I finish this glass. They did vote they ain’t wanna play no more. . . But I didn’t think they was gonna go out like that 😂

Yoooo @Dame_Lillard 🤣🤣🤣🤣 you got an extra villa available in Cabo ?