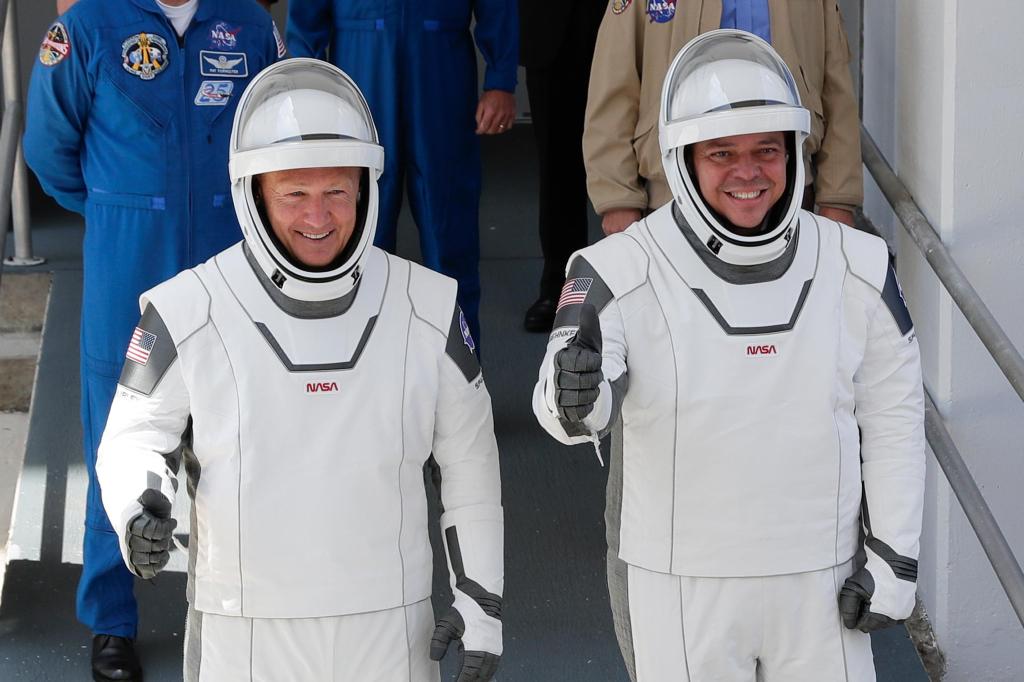 Wrapping up a historic mission that marked the return of U.S.-launched manned space travel, two astronauts who flew to the International Space Station in a capsule built and launched by Hawthorne-based SpaceX are scheduled to begin their trip home tomorrow.

Astronauts Bob Behnken and Doug Hurley have been aboard the space station since May 31, the day after SpaceX’s historic launch from Cape Canaveral in Florida, the first manned launch from U.S. soil since the space shuttle program was retired in 2011.

Their trip in SpaceX’s Crew Dragon spacecraft — named Endeavour — is technically a demonstration flight, showing off the capabilities of the ship as NASA advances private partnerships to revive U.S. space travel.

The launch and subsequent autonomous docking with the space station have gone off seemingly without a flaw, but the mission has one more major step.

Behnken and Hurley are scheduled to be back inside Crew Dragon on Saturday, undocking from the space station at 4:34 p.m. California time for a roughly 19-hour journey back to Earth. The spacecraft is expected to splash down in the Atlantic Ocean at 11:42 a.m. California time Sunday, arriving at one of seven “targeted water landing sites,” according to SpaceX.

Mission controllers, however, are keeping a close watch on the weather, which has been thrown into turmoil by the approach of Hurricane Isaias toward Florida. As of Friday, the astronauts’ departure was still expected to go on as scheduled, but a final decision on whether to proceed may not be made until late Saturday morning.

“We’re watching (forecasts) closely, mostly to maintain awareness and see the trends, and understand what the timeline would be if our recovery out of the water, for example, was delayed a little bit,” Behnken said Friday from the space station during a NASA news briefing. “But we have confidence that the teams on the ground are of course watching that much more closely than we are.

“We don’t control the weather, and we know we can stay up here longer — there’s more chow, and I know the space station program has more work that we can do for the (principal investigators) and other folks who have sent science up to the space station,” he said.

Behnken said he and Hurley spent the last day preparing for the trip, “working through the onboard training that will refamiliarize us with the splashdown activities, what our responsibilities will be, the things that we’ll monitor.”

But even before their mission is completed, SpaceX is already deep into planning for the next one. Assuming there are no glitches with the remainder of Hurley and Behnken’s demonstration mission, dubbed Demo-2, the company will move ahead with Crew Dragon’s first “operational mission.”