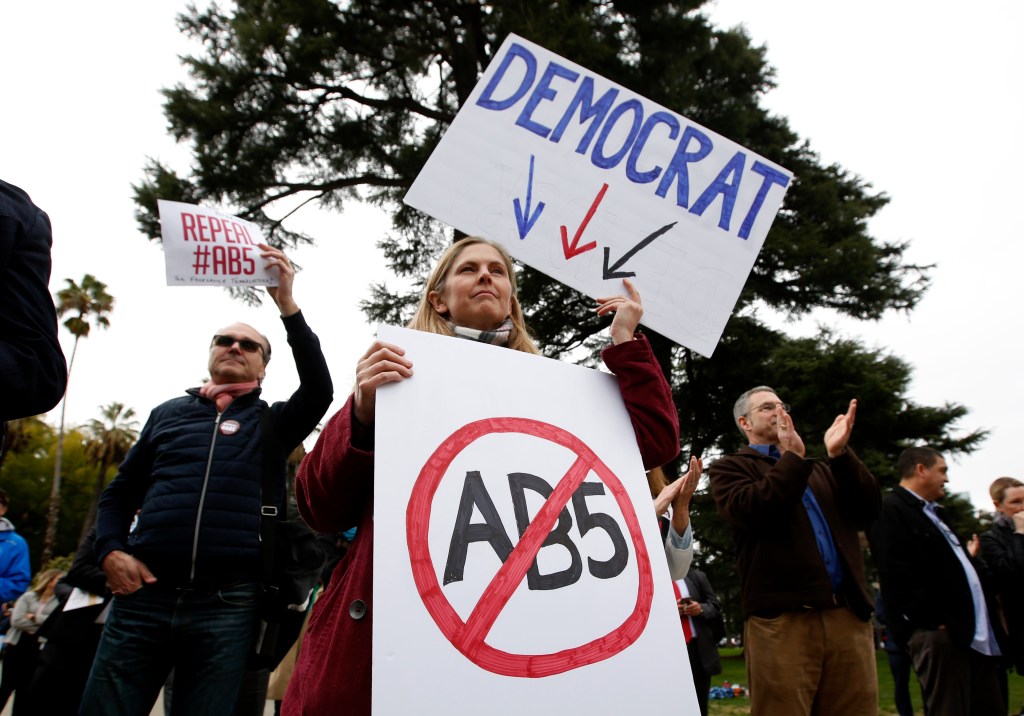 Two recent surveys suggest they’re not interested. A survey of 1,000 on-demand drivers, commissioned by Uber and conducted by a duo of polling firms representing clients on the political left and right, finds that 85 percent prefer some version of their current flexible arrangement. Another survey ⁠— this one of 1,000 independent contractors, and commissioned by Lyft ⁠— concluded that 71 percent want to retain their current status.

Both surveys suggest that workers are happy with their “gig.” Don’t tell that to labor unions and their allies. To bolster their opposition to Proposition 22 ⁠— an initiative on the fall ballot that would solidify on-demand drivers’ and shoppers’ status ⁠— labor has pointed to a handful of comforting studies suggesting that gig workers are exploited.

The first, released through a San Francisco city commission, claimed that most gig workers work full-time schedules and earn poverty-level wages while doing so. But records requests, reported by the Washington Free Beacon, discovered that this conclusion was based on a convenience survey of respondents identified by a labor group–many of whom were paid for their answers. The study organizer acknowledged that the survey–which was drafted to “support organizing” ⁠— was “not representative” of gig workers’ experiences.

Speaking of unrepresentative: Labor and its allies have also hinged their case on a 2019 working paper from Veena Dubal, a law professor at the University of California-Hastings. In her paper, Dubal dismisses the numerous statistical surveys showing that on-demand drivers don’t want to be employees. Her own conclusions are based on “unstructured conversations with drivers in driver organizing meetings” ⁠— among other unrepresentative sources.

Got that? Having sought out the unhappy few among the on-demand shopper and driver community, Dubal concludes that all drivers in the state must feel similarly.

This anti-empirical stance by labor and its academic allies, and their unwillingness to acknowledge that shoppers and drivers prefer their “gigs,” has dangerous consequences.  In a recent legal brief, rideshare company Uber described in damning detail what would happen should it be forced to convert its independent drivers into full-time employees.

An estimated 75 percent of current drivers would lose access to the Uber employment model–resulting in one million lost employment opportunities. (The legal brief notes that these facts are undisputed by the company’s opponents.) Prices would increase for riders by anywhere from 20 to 120 percent; the company further explains that “at least a quarter of rides would no longer be available, with certain cities experiencing a decrease of 40-60 percent.”

The stories behind these statistics are heartbreaking. The Uber brief recites the story of one driver who uses the app to support her two children. One of her children has special needs, which means she can’t work a traditional schedule. If Uber in its current form was no longer available, she wouldn’t be able to support herself.

Another driver is the caregiver for her ailing husband and uses the on-demand app to earn extra income. Yet another has a wife in poor health and couldn’t work a 40-hour-per-week job even if he wanted to. The brief cites several other stories, noting that hundreds of thousands of other drivers have their own personal reasons for working in the gig economy.

The data are clear: For gig workers, flexibility is a perk of the job, not a bug. California legislators, and their constituents, should base their decisions about the future of the gig economy based on robust surveys that reflect this opinion ⁠— rather than flawed reports that tell their funders what they want to hear.