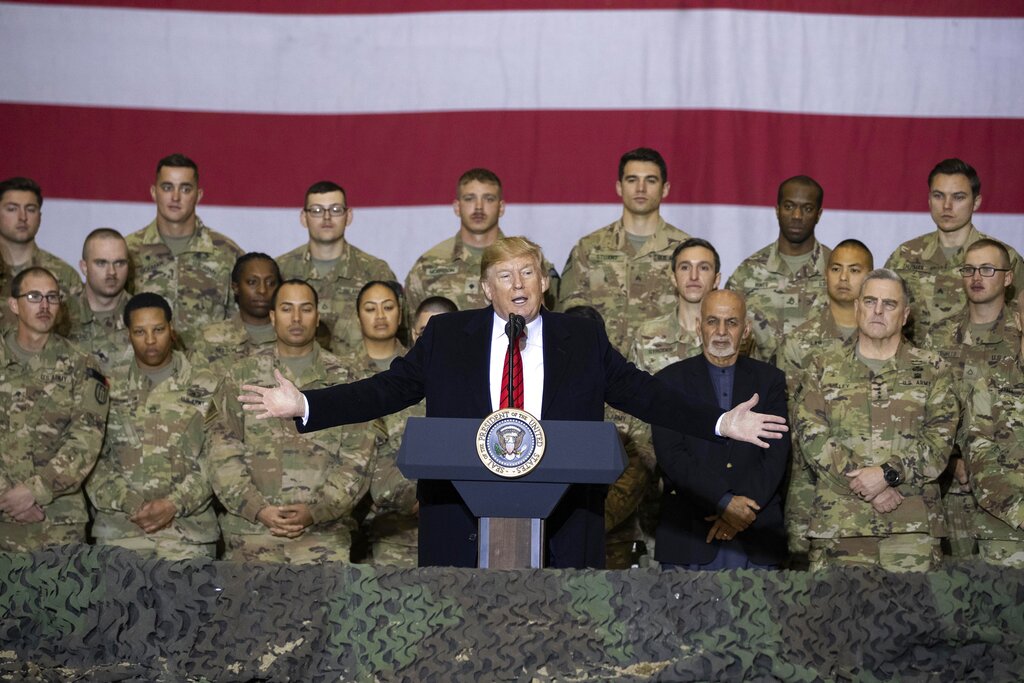 In a farewell address on January 17, 1961, days before John F. Kennedy would be inaugurated, Eisenhower spoke about what he called the “military-industrial complex,” something that he said was a threat to democratic government.

The former general warned that “the immense military establishment” had joined with “a large arms industry” and was capable of acquiring “unwarranted influence” on United States policy.

“The potential for the disastrous rise of misplaced power exists, and will persist,” Ike told the nation, explaining that this was a new phenomenon in America, a “permanent armaments industry of vast proportions.”

President Trump voiced a similar complaint at a recent press conference. He was asked about an anonymously sourced story in The Atlantic that asserted that he disparaged America’s war dead, allegedly telling senior staff members on a trip to France in 2018 that the Aisne-Marne American Cemetery near Paris was “filled with losers.”

On the record, officials who were there denied the story. None of the sources in the report are identified. Trump commented that he’s not too popular with Pentagon leaders because “they want to do nothing but fight wars so that all of those wonderful companies that make the bombs and make the planes and make everything else stay happy.”

It’s not the first time The Atlantic has published the hostile views of anonymous military officials. In a November 2019 piece headlined, “Top Military Officers Unload on Trump,” the sources criticized the president for calling off a retaliatory attack on Iran. They complained that he threatened North Korea with “fire and fury” and then pivoted to a summit with Kim Jong Un.

The unnamed military officials also denounced Trump for announcing in December 2018, on Twitter, that he was ordering American forces in Syria home. Trump wrote, “We have defeated ISIS in Syria, my only reason for being there during the Trump presidency.” Later he added, “Our boys, our young women, our men, they are all coming back, and they are coming back now.”

Did you happen to hear that President Trump has been nominated for the Nobel Peace Prize? It didn’t get much news coverage, and neither did the events for which he was nominated: securing new agreements for diplomatic and economic ties in parts of the world where that would normally be big news.

Trump successfully negotiated an agreement for economic cooperation between Serbia and Kosovo, with an added agreement for diplomatic ties between Muslim-majority Kosovo and Israel. Kosovo will open an embassy in Jerusalem.

That seems a little churlish. A member of the Norwegian Parliament, Christian Tybring-Gjedde, had a different reaction to the negotiations between the formerly hostile parties. He nominated Trump for a Nobel Peace Prize.

A staff writer for The Atlantic called Tybring-Gjedde a “troll.”

The Abraham Accords signed at the White House are another step toward dissolving the “three nos” policy adopted by the Arab League in 1967 at its conference in Khartoum: no peace, no recognition, no negotiations. Even countries that had quiet and friendly dealings with Israel maintained the public hard line against recognizing or dealing with the Jewish state.

Now that artifice of hatred is falling before your eyes, that is, if you’re watching CSPAN-3, where it was covered live. Otherwise, it’s falling while network and cable TV hosts interview former White House officials about the unacceptable abnormality of the Trump administration.

As Eisenhower warned, it became “normal” for presidents to make arms deals instead of peace agreements. There’s money to be made in selling Arab nations the latest planes and selling Israel the latest technology to shoot them down. There’s money to be made in keeping U.S. troops in dangerous parts of the world with no mission except to stay there.

Perhaps the unnamed military officials quoted in The Atlantic are sincere in their belief that Trump’s decisions are wrong. But the 2016 election was a contest between a busload of longtime politicians with their teams of policy experts and a businessman who said the voters should reject the people who were responsible for miring the country in endless wars, bad trade deals and economic stagnation.

We know how it turned out.

The 2020 presidential election will be a referendum on the Trump administration. There’s been plenty of airtime devoted to repeating the views of former officials and unnamed sources who think Trump is doing everything wrong. The voters may have their own ideas of what constitutes success.