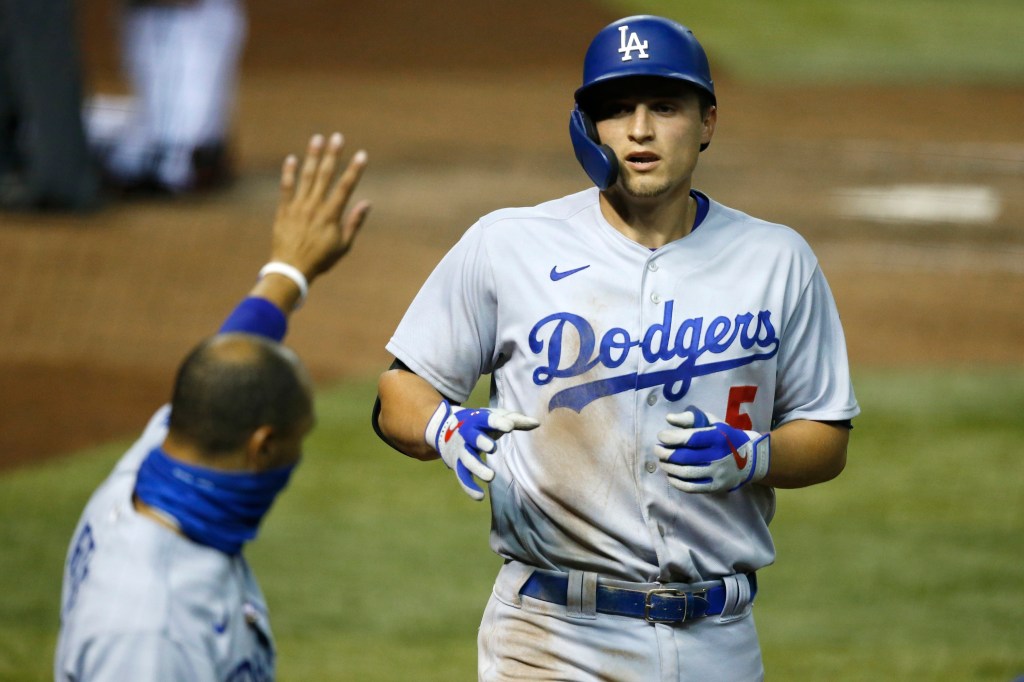 Corey Seager was held out of the Dodgers’ lineup Sunday with an injury Manager Dave Roberts described as “a little bit of a quad.”

Seager was removed from the Dodgers’ game against the Diamondbacks on Saturday as a precaution after he fouled a ball off his calf. He didn’t play the final three innings and was set to be re-evaluated today.

The quadriceps issue might be the result of dehydration, Roberts said. The Chase Field roof was closed all weekend, but the temperature outside reached 111 degrees Sunday.

“I want to give him an extra day and see where we’re at,” Roberts said of Seager.

Chris Taylor started at shortstop in place of Seager, who is hitting .361 and began the day leading Major League Baseball in extra-base hits and total bases.

When MLB and the Players’ Association agreed to expand active rosters to 30 players to begin the season, they also agreed to reduce rosters to 28 after two weeks. Thursday is the two-week mark, and a rare off-day for the Dodgers in the 60-game season.

“I have heard rumblings that they’re contemplating keeping them at 30,” Roberts said. “Right now we’re planning on the rosters being at 28.”

The two cuts will come from a 12-member bullpen that collectively leads MLB in relievers’ ERA (1.06).

Touted as a National League Rookie of the Year candidate prior to the season, Gavin Lux was widely expected to be in the Dodgers’ everyday lineup. Instead, he was a late arrival to the team’s summer camp and was optioned to the alternate training site before Opening Day.

“He’s taken live at-bats every day,” Roberts said. “He’s getting closer. Robert (Van Scoyoc, the Dodgers’ hitting coach) is in lockstep with him. … We’re getting reports every day, video. He’s coming. There’s a lot of parts to his swing. From what I hear it’s improved, not quite there yet.