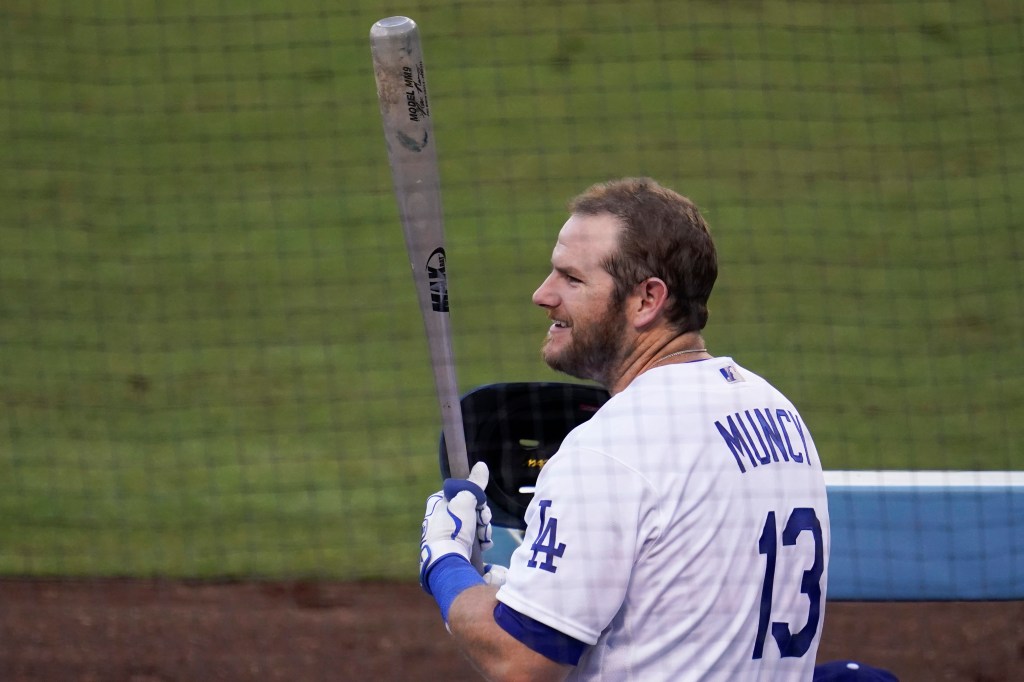 LOS ANGELES >> This has not been the year Max Muncy expected. But that’s true for all of us these days, isn’t it?

In Muncy’s case, though, he has taken a lesson from the pains of his 2020.

“It’s extremely difficult,” said Muncy of the pressure that comes from slumping when you know you only have 60 games to turn things around. “But at some point, you have to realize that it really isn’t about you. Whether you do great or do terrible, all that matters is the team winning. The ultimate goal is for the team to win, not for you to win personally.

“Once you can realize that, it makes it a little bit easier. It’s still one of the hardest things in the world.”

Muncy went into Wednesday’s game batting .191 with a .722 OPS. His average has nosed above .210 for just one day since the start of August. His OPS has languished under .800 for just as long.

Muncy’s frustrations have been evident at times and Dodgers manager Dave Roberts has been seen putting his arm around Muncy, trying to bring him back from the dark side.

“He’s an all-star player and hasn’t got on track yet so I always think it’s a good thing to let the player know that we’re all in it together,” Roberts said of those counseling sessions.

Roberts has shown his confidence in Muncy in other tangible ways, keeping him in the middle of the lineup for the most part despite his season-long slump.

The statistics inside Muncy’s season confirm that his approach is still sound. He has maintained his strike-zone management skills. He is actually swinging at a lower percentage of pitches outside the strike zone this season (16.2) compared to seasons past while maintaining essentially the same walk and strikeout rates as last year.

When he does put the ball in play, though, Muncy is hitting more ground balls and hitting fewer balls hard overall.

“I think that it started off early with the little fracture and then some time away, trying to work through his mechanics,” Roberts said referring to a broken finger Muncy suffered in Summer Camp. “There’s some things mechanically he hasn’t been able to kind of lock down.

“I think the ground ball is more mechanics because I certainly know that that’s not the intent. … His ability to control the strike zone, that’s something for me that I hang my hat on. And when you’re talking about in the postseason where you’re seeing 1s and 2s and 3s and top-end bullpen guys, controlling the strike zone is really important and that’s something that I know Max does a really good job of.”

Going into Wednesday’s games, there were six teams stacked up within two games of each other, all vying for the fifth through eighth seeds in the National League playoffs.

As the top seed, the Dodgers will face the eighth seed in a three-game Wild Card Series beginning next Wednesday at Dodger Stadium. Their opponent could be any one of those six teams including five — the Cardinals, Marlins, Reds, Brewers or Phillies — they have not played in 13 months (the Marlins) or more.

In one scenario, the Dodgers might not know their WC Series opponent until Monday night. The Cardinals (currently fifth in the NL postseason seedings) might need to play a doubleheader against the Detroit Tigers in order to make up games postponed due to a COVID-19 outbreak if those games are needed to set the playoff field.

“It cuts both ways,” Roberts said of the combined uncertainty and lack of familiarity with their first postseason opponent. “For us, I think it’s just more of worrying about ourselves, preparing for any opponent we might face. I think at the end of the day, they’ve still got to throw the baseball over the plate and we have to make plays and take good at bats and do the same thing and get guys out. If we do that, we’re gonna be fine.

“So the whole game of trying to get caught up in who we play and all this and how we match up. I just don’t have a tolerance for it.”

Left-hander Caleb Ferguson posted on social media Wednesday that he had undergone Tommy John surgery as expected. Ferguson, who will not return until the 2022 season, thanks fans for their support and said “Road to 2022 starts now!”