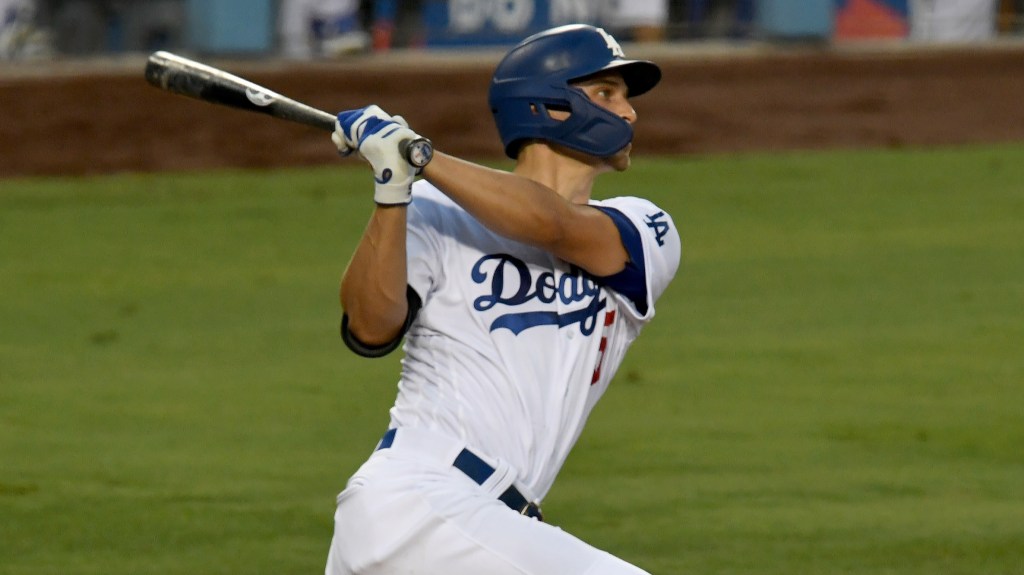 Baseball’s new age of quantifying everything has myriad ways to measure the simple — though not easy — act of connecting bat to baseball.

They all confirm what the eyes and ears have been telling us: Corey Seager is doing it as consistently well as anyone in baseball this year. According to Statcast, the Dodgers shortstop has put the barrel of the bat to a baseball in 12.6 percent of his plate appearances this season. No one in baseball has done it at a higher rate.

Seager has been credited with 89 hard-hit balls (an exit velocity of 95 mph or higher). Only San Diego’s Fernando Tatis Jr. (97) has done it more times (in 33 more plate appearances). Seager’s percent of swings resulting in hard-hit balls (22) is third in the majors behind only Tatis (22.8 percent) and the Angels’ Mike Trout (22.5).

And Seager’s average exit velocity of 93.3 mph is 10th in the majors, sixth in the National League and tops on the Dodgers.

“A lot of that is kind of just health, being strong again, being in very similar positions when I show up to the field,” Seager said. “Last year especially, I just wasn’t physically as strong as I would like to have been. Your body kind of changes. You get tired, things start changing positions on you. Just being strong again and being healthy again has definitely helped that.”

By most measures, Seager was healthy last season. But coming off two significant surgeries in 2018 — Tommy John surgery on his right elbow and arthroscopic surgery on his left hip — he had been living in rehab mode for a very long time.

Coming into 2020, he had finally moved past that and returned to more strength training. The difference in his body was evident in spring training. The four-month quarantine between the end of spring training and the start of Summer Camp was “a blessing” of sorts, Seager admits, allowing him to build up his post-surgery body even further.

The resulting strength gains have been obvious. His .589 slugging percentage is the best of his career (a career that already includes two Silver Slugger awards). His 13 home runs this season project to 39 over a full 162-game season, a total that would blow past his career high of 26 in 2016.

“I like where his weight is at,” Dodgers manager Dave Roberts said of the stronger Seager. “His body is just aligned. I don’t know if it’s the hips, obviously the elbow, the back — everything is just kind of moving the right way. And he’s been very diligent about his exercises with the guys in the training room, the strength and conditioning guys, the weight room all that stuff. It just kind of all looks right for me.”

Other than Seager, there has been little right about the Dodgers’ left-handed hitters this season. Reigning NL MVP Cody Bellinger, Max Muncy and Joc Pederson have all underperformed this season — massively in some respects. Bellinger’s OPS (.746) is down nearly 300 points from his MVP season. Muncy’s average, on-base percentage and slugging (.189/.330/.373) are all the lowest of his Dodgers career. Pederson’s numbers have similarly cratered this season.

All of that allowed — necessitated — Seager to rise from the bottom half of the Dodgers’ lineup early in the season to his former home, batting second. It has created a dynamic 1-2 at the top of the lineup with Mookie Betts and Seager driving the Dodgers’ offense.

“He’s playing like an MVP,” Roberts said of Seager, though it would apply to either. “Defensively, offensively — I think he’s in the top three as far as quality of contact, how hard the ball comes off his bat. He’s a doubles machine. Really excited he’s healthy. So we’ve got to keep him healthy and keep him on the baseball field.”

The Dodgers reinstated Joc Pederson from family emergency leave Monday. Zach McKinstry was optioned back to the alternate training site.