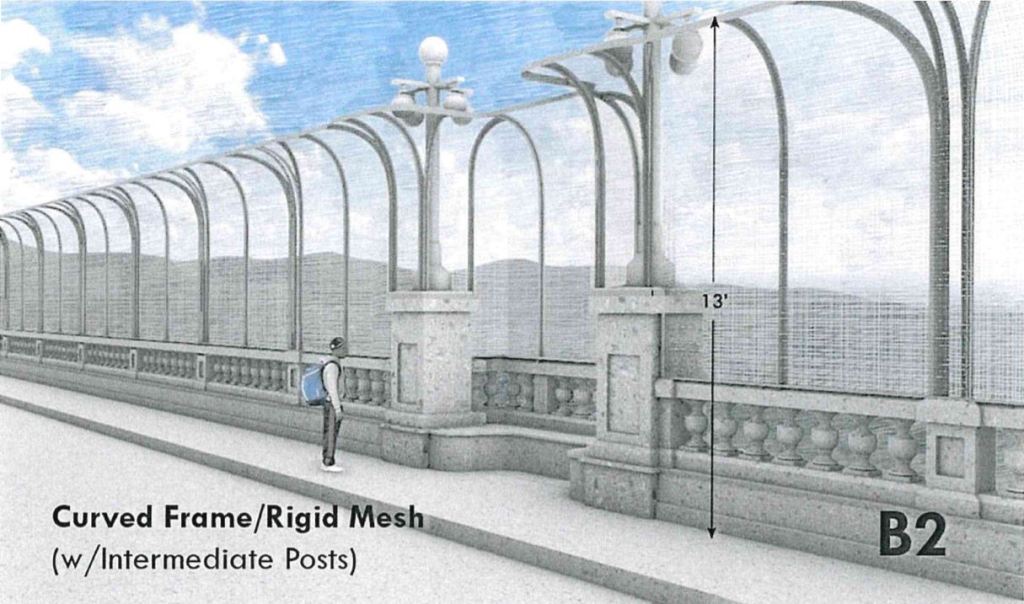 Pasadena will likely order full-scale samples of three different suicide-prevention barriers, which the city will install across parts of the Colorado Street Bridge for the public to see in-person before one of the designs becomes a permanent fixture across the entirety of the bridge.

The $160,210 purchase from Chastworth-based Custom Design Iron Works, Inc. was approved by the city’s Public Safety Committee on Wednesday, Sept. 16, and heads to the council for final approval, expected to pass on Monday, Sept. 21.

Out of a handful of designs reviewed by city officials and members of the public late last year, two leading candidates emerged. Both options have stainless steel mesh running along the length of the bridge with curved sections around the bridge’s lampposts, a staff report says.

The designs differ at the very top: One curves inward, the other stays completely straight. Architects believe the curved top is more difficult for someone to circumvent, but some Pasadenans fear it would be more unsightly than the straight top. Hence, installing samples to help settle the debate.

A third option will also be installed, though it was the least preferred among officials and the public alike: Just a plain old straight picket fence across the length of the bridge.

While the vast majority preferred the mesh designs, City Engineer Kris Markarian said some on the task force wanted to see the picket fence “as a point of comparison.”

The samples will be installed on different parts of the bridge to better assess their relative opacity and obtrusiveness whether that’s up close, afar or in a moving car, Markarian told the committee on Wednesday.

Once the council approves the $160,000 order, city staff will facilitate the installation on the bridge — which still has temporary chain-link fencing along its railing — and it should be available for the public to view by early November, a staff report says.

By December, the Design Commission will start sharing its thoughts on the bridge, then the Public Safety Committee and City Council. A design will likely be picked and approved by January 2021, the report says.

Since 1919, more than 150 people have jumped to their deaths from the bridge. Since installing the chain-link fences, officials say fewer people have tried to jump, although it still happens.

Over the past 12 months, two people have tried to jump from the bridge, but both were talked down before they could leap, Public Works Director Ara Maloyan told the committee.

Once a design is picked out, the overall project is expected to cost about $5 million.