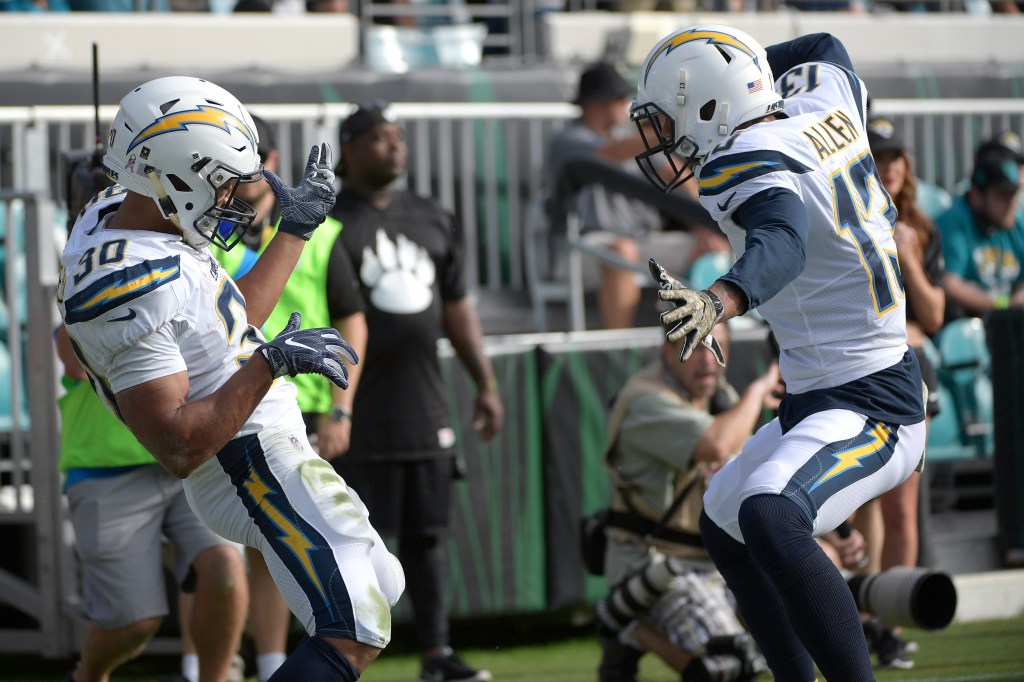 COSTA MESA — The Chargers were reminded this week it would be unwise to get into a shootout Sunday against the Kansas City Chiefs for their SoFi Stadium debut.

Quarterback Tyrod Taylor didn’t agree with that approach because they’ll need to score many points against the defending Super Bowl champions. The 16 total points in the season-opening win against the Cincinnati Bengals likely won’t be enough versus the Chiefs.

“If it’s a shootout, then it is one,” Taylor told reporters Wednesday. “But at the same time, we know this team can score as well. We have tremendous faith in our defense and just our plan moving forward with the Chiefs.”

The unsolicited advice should have been directed at the Chargers’ defensive players. They’re the ones with the daunting task of keeping Patrick Mahomes and his high-octane offense out of the end zone. If the defense contains them, then there won’t be a shootout.

The game plan is simple for the Chargers’ offense.

“We want to get the ball in the end zone is what we want to do,” Chargers coach Anthony Lynn said. “We’re gonna need to score points.”

To score points, the Chargers will need sizable contributions from wide receiver Keenan Allen and running back Austin Ekeler.

Allen had a quiet four catches for 37 yards versus the Bengals. Ekeler had a career-high 19 carries for 84 yards, but zero dynamic plays, the kind he constantly produced during his breakout 2019 season.

Lynn said most of Ekeler’s catches last season came on checkdowns from quarterback Philip Rivers. That won’t happen as often this season with the mobile Taylor having the option of running with the ball.

“We definitely want to get the ball in Austin Ekeler’s hands whether that’s hand it off or throwing it to him,” Lynn said. “There are always ways to get Austin Ekeler the ball. Trust me, he will get his touches.”

If Lynn’s words aren’t enough to put fans at ease – or those who have Ekeler on their fantasy football teams – keep in mind the Chargers made a four-year, $24.5 million investment in Ekeler this offseason. They also recently handed Allen a lofty four-year, $80.1 million extension with $50 million guaranteed.

The Chargers know the importance of Ekeler and Allen. They’ll be schemed into the offense, despite Taylor’s strengths.

Taylor’s starting debut with the Chargers was reminiscent of his 46 other starts with the Buffalo Bills and Cleveland Browns. He utilizes the tight end and prefers downfield shots over intermediate throws. So it was no surprise that his two leading receivers in Week 1 were tight end Hunter Henry and deep-threat wideout Mike Williams.

Taylor has struggled with accuracy throughout his 10-year career, and he’ll need to improve in that area to get Ekeler and Allen heavily involved.

But it was also Taylor’s first start in nearly two years. The timing and rhythm Ekeler and Allen developed with Rivers will take time with Taylor.

Many Chargers fans weren’t pleased with Taylor’s performance versus the Bengals and it doesn’t help that the Browns scored 35 points on that defense Thursday compared to the Chargers’ 16.

But Taylor did his job by not turning the ball over. With Taylor’s mobility and ball security, the Chargers can go on long drives to keep the ball away from the Chiefs and allow their defense to stay fresh.

The biggest obstacle will be to end those long drives with touchdowns. They’ll need Allen and Ekeler for that.

Turner, who missed the season opener with a knee injury, was removed from the Week 2 injury report. He was a full participant for the past two practices.

The Chargers traded left tackle Russell Okung in the offseason to the Carolina Panthers for Turner.

“Looking forward to seeing him play,” Lynn said Friday about Turner. “He makes a difference when he’s in the game. I love the way he finishes blocks.”

Turner will line up next to prized free-agent addition Bryan Bulaga to form one of the top right sides to an offensive line in the NFL. The rest of the Chargers’ offensive line has question marks, especially with center Mike Pouncey out for the season with a hip injury.

But center Dan Feeney, left guard Forrest Lamp and left tackle Sam Tevi all have plenty of experience. It’s a make-or-break season for the 2017 draft picks.

“It’s pretty cool to see the ‘17 class all on the line rolling together,” Feeney said. “It’s kinda weird. Four years fly by.”

Running back Justin Jackson was listed as doubtful after not practicing all week because of a quadricep injury.

Fans won’t be in attendance for the Chargers’ first game at SoFi Stadium, but the team is offering them a game-like experience with their latest app.

The Chargers Home Turf app will provide a feed of SoFi Stadium’s massive Oculus video board and sync with the TV broadcast to avoid delays and spoilers.

For example, if Allen records a catch against the Chiefs to move the chains, the app feed will flash the first-down graphic just like on the video board at SoFi Stadium.

Fans will also be able to chat with each other and talk to former Chargers players. Hall of Fame running back LaDainian Tomlinson is scheduled to be on the Chargers Home Turf app Sunday. More information can be found at Chargers.com/HomeTurf.

The Chargers also updated their team app, which will stream games for fans in the Los Angeles area.