“This timely survey shows common ground on real solutions” and “Opportunities to bridge across racial and political spectrum.”

BERKELEY/WASHINGTON DC: Majorities of Americans across racial and ethnic backgrounds support meaningful changes to policing, including requiring officers to live in the communities they police and involving community-resource workers in certain emergency calls, a new national poll found.

The poll also found broad support for economic policies and programs to reduce wealth and income inequality, including a federal jobs guarantee, temporary suspension of rent and mortgage payments, fair hiring protections for people with criminal histories, and a program to provide grants to Black entrepreneurs starting small businesses.

The results point to encouraging opportunities for unity among Black, Latinx, and white Americans on priorities for tackling inequities.

The poll was designed by the Othering & Belonging Institute at UC Berkeley (OBI), Prosperity Now (PN), and the Council for Minnesotans of African Heritage (CMAH), in collaboration with PolicyLink, Community Change, and Race Forward. It was administered by Lake Research Partners between August 28 and September 1—less than a week after the police shooting of Jacob Blake in Wisconsin reignited nationwide protests against police violence.

Overall the survey of 1,400 adults nationwide suggests there is more agreement than some would expect on issues surrounding policing and public safety policy. Notably, the idea that substantive change is a high priority is not unique to Black communities, but is in fact shared by a nearly equal share of Latinxs.

“What the poll tells me is there are opportunities to bridge across the racial and political spectrum,” john a. powell, Director of the Othering & Belonging Institute, said. “We see a lot of agreement on some important principles, and on the need for change. Even where there is disagreement, there is space for us to talk to each other. These are complicated issues, and it’s encouraging to see that people are grappling with them to find a path forward.”

The national poll was accompanied by a sister poll of 1,000 adults in Minnesota, where global protests against racism and police violence began early in the summer in response to the killing of George Floyd. Results in Minnesota largely reflected the findings of the national poll, with some variations. Both polls featured large over-samples of people who identify as Black/African American to ensure statistically reliable results for this group.

Previous research conducted over the summer has found that Americans across partisan lines increasingly agree on changing some controversial policing tactics, like the chokehold and so-called no-knock warrants. But the OBI-PN-CMAH poll examined views on more transformative policing alternatives.

It found, for example, that 73 percent of Black Americans, 65 percent of Latinxs, and 61 percent of whites said that, “Having community-resource professionals like social workers, paramedics, or mental-health workers respond alongside police officers in encounters involving homelessness, drug addiction, mental illness, or nonviolent offenses,” would be a high priority (score of 4 or 5 on a 1-5 scale).

Majorities also supported an alternative version of the question in which these community-resource professionals would respond instead of (rather than alongside) police officers. Here, 66 percent of Black respondents, 53 percent of Latinxs, and 51 percent of whites scored this as a high priority.

Majorities across lines of race/ethnicity also supported the idea of “requiring that police officers maintain liability insurance to cover costs for civil suits concerning misconduct, as many states require doctors and lawyers to do.” Nationally, 64 percent of Black Americans, 63 percent of Latinxs, and 57 percent of whites support this proposal. In the Minnesota poll, fully 4 in 5 Black Minnesotans agreed that police officers should be required to carry liability insurance along the lines required of doctors and lawyers.

Agreement across Black and Latinx respondents on the need to transform policing undoubtedly arises from their shared misgivings about police. While 82 percent of white Americans said they feel confident that they could call on and trust the police in an emergency “always” or “most of the time,” just 53 percent of Black Americans and 58 percent of Latinxs said the same.

But across all racial and ethnic groups, the poll pointed to a country in need of healing, where large shares lack a sense of belonging. In questions about belonging—defined as feeling comfortable, safe, and having a say in the important things happening around you—nearly half of Black (47 percent), Latinx (49 percent), and white respondents (45 percent) said they usually do not experience it in public places in their city or town. Between 30 and 39 percent across each of these groups said they usually don’t experience belonging even in their own neighborhoods, and equal shares of those who work said the same of their workplaces.

But the most popular of the economic policy proposals was a federal jobs guarantee for all American adults. Nationally, 70 percent of Black Americans, 71 percent of Latinxs, and 60 percent of whites said this was a high priority (score of 4 or 5 on a 1-5 scale). Likewise, in Minnesota, where the Black unemployment rate has skyrocketed since the Covid-19 pandemic, 71 percent of Black respondents said a jobs guarantee was a high priority, and over half (53 percent) scored it a 5—“the highest priority.”

“The dual crisis of social unrest and Covid-19 gives our nation an opportunity to build a new economy that serves all Americans,” said Gary L. Cunningham, President of Prosperity Now. “This timely survey shows common ground on real solutions, as a majority of people across the United States of different racial and ethnic backgrounds support broad economic programs to help close the racial wealth divide.”

Finally, although the idea of providing payments to Black Americans as restitution for slavery and generations of discrimination remains polarizing, pluralities would support increasing taxes on corporations and using the money to provide grants to Black entrepreneurs. Support for such a policy was highest among Black Americans (68 percent nationally, 78 percent in Minnesota), but it also finds significant support among Latinxs (51 percent) and whites (43 percent nationally, 46 percent in Minnesota). 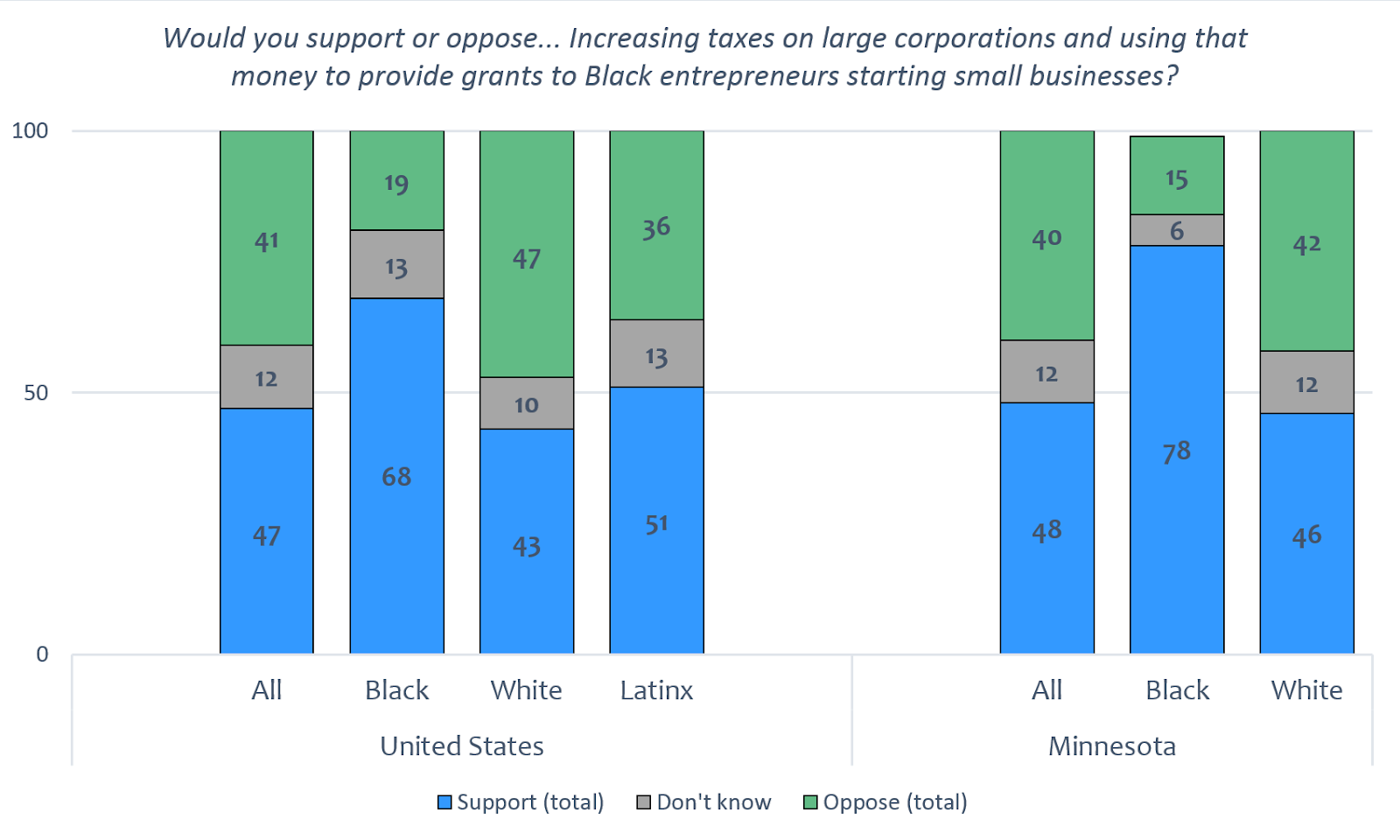 Prosperity Now believes that everyone deserves a chance to prosper. Since 1979, we have helped millions of people, especially people of color and those of limited incomes, to achieve financial security, stability, and ultimately, prosperity.

The Othering & Belonging Institute at UC Berkeley brings together researchers, organizers, stakeholders, communicators, and policymakers to identify and eliminate the barriers to an inclusive, just, and sustainable society in order to create transformative change.

The Minnesota Legislature empowered the Council for Minnesotans of African Heritage to ensure that people of African heritage fully and effectively participate in and equitably benefit from the political, social, and economic resources, policies and procedures of the State of Minnesota.