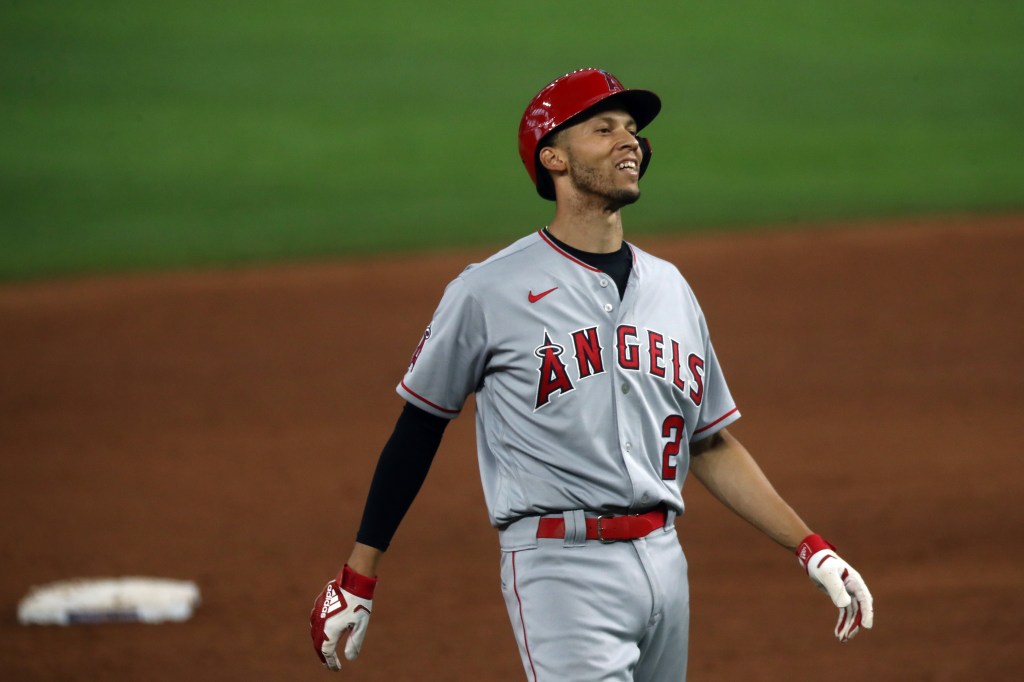 According to FanGraphs, the Angels entered Tuesday’s game against the Padres with a 0.4 percent chance of making the playoffs. In all likelihood, their season will end Sunday.

Andrelton Simmons’ season is already over.

The 31-year-old shortstop informed the Angels on Monday he was opting out of the season’s final five games. Players and coaches were given the right to opt out of the 2020 season under the terms set by commissioner Rob Manfred in June.

The news came as a surprise within the organization. No player or coach on any team had opted out of the season since Cardinals coach Willie McGee on Aug. 14. The last player to opt out was Mets pitcher Marcus Stroman on Aug. 10.

“Driving home last night, Billy (Eppler, the Angels’ general manager) called me, wanted to make sure I was holding onto the wheel properly, and told me the news,” Manager Joe Maddon said during his pregame Zoom session with reporters Tuesday. “That’s all I know. I haven’t spoken with Andrelton. I texted him on the bus ride down. Have not heard back.”

Simmons will become a free agent at the conclusion of the season. He was limited to 30 games this year because of a sprained left ankle, and batted .297 with seven doubles and no other extra-base hits. He did most of his damage against right-handed pitchers (.309). Maddon said he’d already planned on having Simmons in Tuesday’s lineup against right-hander Zach Davies.

In a statement provided by his representatives at ISE Baseball, Simmons said: “I have made the decision to opt out of the remainder of this season. Major League Baseball and the Major League Baseball Players Association developed an environment and system that empowered players and provided us the opportunity to decide on whether to play or opt out of the season. At this moment, I feel this is the best decision for me and for my family.

“We don’t know what the future holds, but we would like to sincerely thank the Angels organization and Angels fans for welcoming and making us feel at home.”

The Angels placed Simmons on the Restricted List and added infielder Elliot Soto to their active roster. Soto, 31, is a veteran of 867 minor league games since 2010 who had yet to reach the majors.

“This year has presented unique challenges for so many and the Angels respect Andrelton’s decision,” the team said in a statement.

The timing of Simmons’ announcement raises questions about his desire to play in Anaheim beyond this season.

While some players – notably star center fielder Mike Trout – expressed concerns about playing and traveling amid a pandemic, Simmons was not among them. Privately, Maddon said, Simmons had not discussed opting out of the season before announcing his decision. He’s the first and only Angel to opt out.

Now, Simmons’ teammates must cling to their slim postseason hopes without a player who had provided a steady bat and excellent glove since he was acquired from the Braves in November 2015.

“I really enjoyed this guy a lot,” Maddon said. “This guy’s a good baseball player, as we all know. I really enjoyed the conversations too. I do wish him well. He’s a wonderful young man. It’s just unfortunate. He’s a big part of what we’re trying to do right now.”

The Angels acquired Simmons and catcher José Briceño in a trade with Atlanta for Erick Aybar, Sean Newcomb and Chris Ellis. He had already won two Gold Gloves with the Braves and added two more with the Angels in 2017 and 2018.

Multiple ankle injuries over the last three years robbed Simmons of some of his flash in the field. He was still such a force that he made 554 of his 556 starts as an Angel at shortstop, with the other two coming as a designated hitter. He made nine starts this season batting leadoff, in a lineup that ranked third in the American League in runs scored through Monday.

On a Zoom call with reporters on Tuesday, Sept. 15, Simmons gave no indication he was in a hurry to leave Anaheim.

“I enjoy playing here,” he said. “I’ve had a good time. I made good friends. I like the city. But I know at the end of the day, it’s not completely in my hands and I know it’s a little bit of business, so while I’m here, I’ll give everything I’ve got. I think I’ve proven that throughout the years of playing banged up or like going full effort on certain things and certain plays. While I’m here, I’m going to give everything I have.”