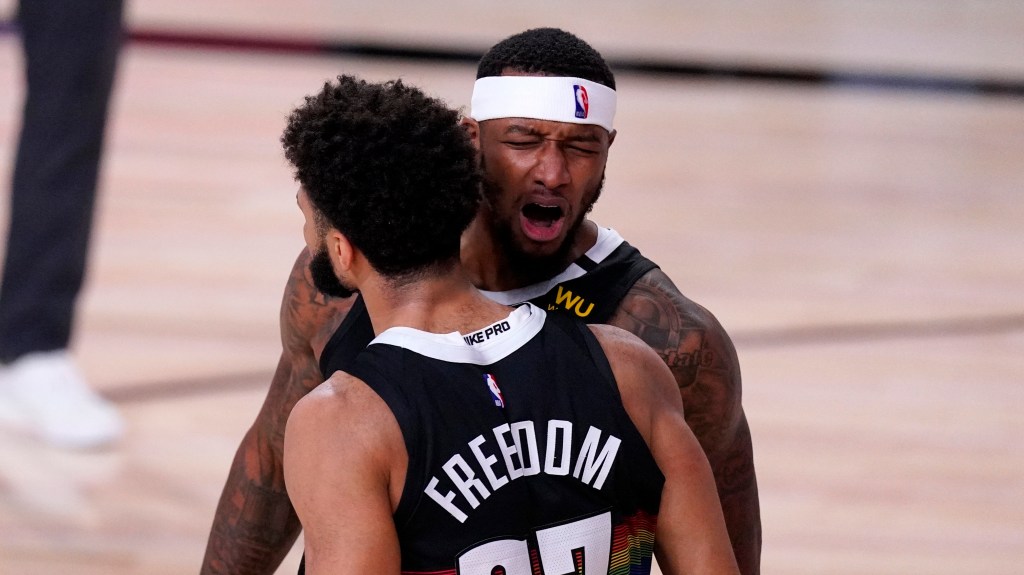 Is it fair to say now that Sunday’s frantic finish was not much more than fool’s gold for the Lakers?

Anthony Davis’ buzzer-beating 3-pointer to knock off Denver in Game 2 of the Western Conference Finals camouflaged some issues with turnovers, fouls, defensive breakdowns and general sloppiness. Frank Vogel hoped those flaws, pointed out in the off-day film session, would get his players’ attention before Tuesday night’s Game 3.

Obviously not, at least until the fourth quarter. And oh, by the way, if you thought that Davis’ shot might somehow have crushed or even diminished the Nuggets’ spirit, Denver offered a spirited rebuttal Tuesday night in its 114-106 triumph.

Now the series is 2-1, L.A. Should the Lakers win Game 4 Thursday night, then you’d have to say the Nuggets have them exactly where they want them. And as for those who rashly proclaimed the series over when Davis knocked down that shot Sunday? It’s just getting started.

“This is to me kind of similar to the last series. Game 1 the Clippers blew us out. Game 2 we win. Game 3 we felt we gave that game away against the Clippers. They (the Lakers) blew us out in Game 1. Game 2 we gave away at the end. We had to right that wrong and try and get a game under our belt, which we did tonight.

“This gives us that much more confidence going into this series, letting them know that we’re here, we’re in this for the long haul.”

It was absolutely an impressive comeback emotionally by the Nuggets, but it was probably to be expected. They’d already demonstrated their mental toughness in the last two series. Why should this be any different?

Vogel said he had written “dodged a bullet” on the Lakers’ locker room board after Sunday’s game, which they won despite 24 turnovers. The idea was that this was the best of both worlds – a win and yet the opportunity to point out some serious flaws.

“We didn’t run enough and we didn’t attack the paint,” he said before the game. “We were sloppy. When we did get in the paint, we turned the ball over. We had one of our worst finishing games of the year at the rim. … Our guys are well aware that we dodged a bullet, finishing a game with 24 turnovers. Usually that equals a loss in the playoffs, especially with 30 fouls.”

But this was worse. Denver scored 19 points off those 24 turnovers in Game 2. Tuesday night the Nuggets, with active hands on defense, forced 16 turnovers and cashed them in for 25 points. Although the Lakers were able to come within three points with 5 1/2 minutes left, thanks in large part to a 1-2-2 zone, the ground was too much to make up.

“Same as Game 2. Same thing we were able to get by with because of AD’s shot. We turned it over too much. We put them on the free-throw line. I’ve got to give credit where credit is due, because Denver played an excellent game. Even after Game 2, we talked about that, and we’ve gotta be better in Game 4.

But maybe Davis struck at the heart of the issue Tuesday night. From the start, maybe specifically because of the way the game turned Sunday night, the Nuggets came out aggressively. Instead of breaking their spirit, that ending bolstered it.

“We didn’t come out very aggressive or physical tonight.”

The guy who knows the Nuggets best was not surprised that his team was willing to take the initiative Tuesday night.

“When we met and we watched the film, I started off by watching the last play of the game, (to) get the elephant in the room out of the way,” Malone said. “Let’s talk about the play, what happened. When we’re in this situation again, let’s learn from it. Yes, we all take ownership. Let’s learn from it.”

And when you’ve already won six straight elimination games, why would you be fazed by one buzzer-beater?

“Everybody always has us packing our bags and leaving, but we’re not ready to go,” he said. “For some reason we love this bubble. I can’t explain that, but this team loves the bubble.”

At this point, why wouldn’t they?