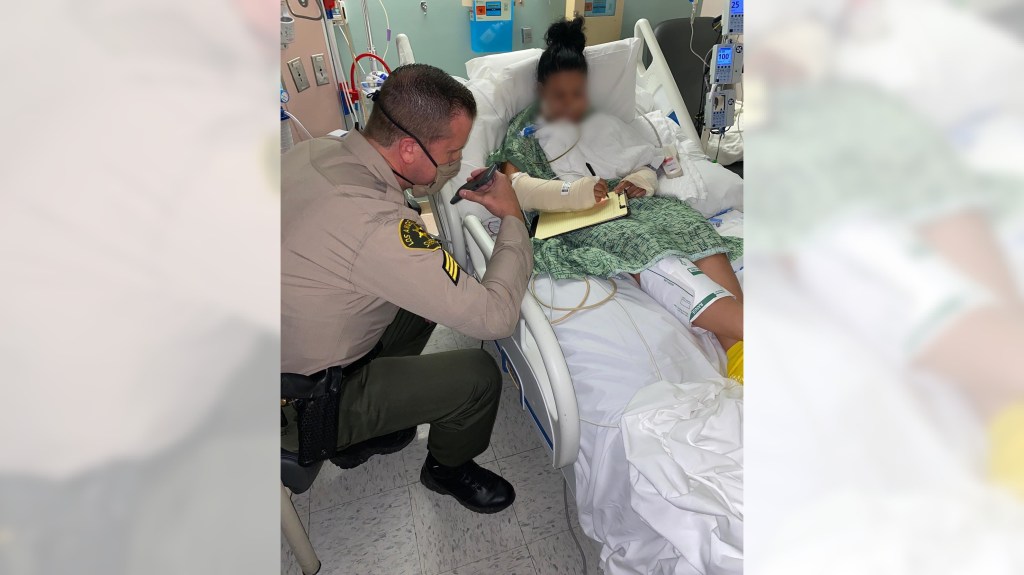 A second Los Angeles County Sheriff’s Department deputy was released Monday, Sept. 21, from a hospital after the two were shot in Compton this month, authorities said.

Great News… both of our Deputies from the #ComptonAmbush have been discharged from the hospital and are resting. They both have a long road to recovery and #LASD appreciates your continued prayers and all the support. #LASDStrong pic.twitter.com/FAXt1yalmp

One of the injured deputies is a 24-year-old man who left treatment at St. Francis Medical Center in Lynwood Wednesday, Sept. 16, four days after the shooting. The other is a 31-year-old mother of a six-year-old. Both were sworn into service just 14 months before they were wounded.

It wasn’t immediately known if the injured female deputy, who was also treated at St. Francis, would receive long-term care elsewhere or if she could go home.

In the days after the shooting, Sheriff Alex Villanueva had said the department was trying to see if it could have the deputies transferred to a place where they could get long-term care.

(1 of 2)While our deputies are continuing to recover from being ambushed & shot multiple times Saturday night, the nation has truly shown how wonderful they are. It is heartwarming to receive letters/emails of support, cards, donations & flowers every day since the shooting #LASD pic.twitter.com/LQXi6hLx0n

Donors have pledged over $800,000 to pay for their medical expenses. A reward of over $500,000 has been offered for information leading to the arrest of whoever was responsible for the shooting.

On social media over the weekend, the LASD Transit Services Bureau posted photos of the injured female deputy in the hospital communicating with President Donald Trump, who the LASD said “called both of our deputies to check on their spirits, wish them a speedy recovery and remind them that the #american people are behind them and that the coward that harmed them will be brought to #justice!!”

The Transit Services deputies were seated in a marked Sheriff’s Department vehicle when a person was seen walking past them in surveillance footage recorded at the Metro Station. The suspect then turned and fired into the passenger side of the SUV before fleeing the scene.

No arrest had been announced as of Monday evening. A detailed description of any possible suspect was not immediately released.

Officials have not identified the deputies, and both wish to remain anonymous,  Sheriff’s Deputy Joana Warren said Monday evening.

“Their loved ones were already worried when they got into this profession, and then something like this happens,” Warren said. “They want to protect their families, especially considering all the attention this has gotten.”